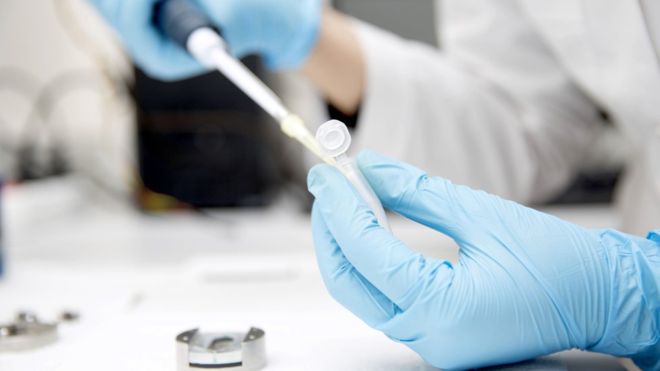 Twenty thousand households in England are being contacted to take part in a study to track coronavirus in the general population.

The study aims to improve understanding of infection levels and how many people may have immunity to the virus.

Volunteers will provide nose and throat swabs on a regular basis to see whether they have the virus.

The findings will help to inform the government’s strategy for easing the lockdown.

Meanwhile, the government’s scientific advisers will present their findings to ministers later on whether the public should wear face masks.

No decision has yet been made, but the expectation is that the Scientific Advisory Group for Emergencies (Sage) will recommend that the public should not wear medical face masks, Newsnight’s Nicholas Watt says.

But the scientists may well say that people should be free to wear their own masks or a scarf across their face as they do provide some benefit, he added.

The tracking study being announced by the Department of Health is the largest to date of the population in England, with 20,000 households being approached by the Office for National Statistics to take part in the pilot phase.

Tests will initially be undertaken once a week for five weeks and then every month for 12 months.

Both those with symptoms of the virus and without will be tested – with participants drawn from a representative sample of the UK population by age and geography.

Blood samples (antibody tests) will also be taken from adults in 1,000 households to ascertain whether they have had the virus in the past and have developed some form of immunity. Monthly samples will continue to be taken for a year.

One of the great unknowns when it comes to coronavirus is just how many people are infected but do not show symptoms.

There is some evidence that as many as half of infections are asymptomatic.

Knowing the extent of this will be crucial in managing the gradual moves out of lockdown and relaxing restrictions.

This study will provide help with that – and more. With the initial results expected early in May it will also provide some clue to the extent of transmission in the community overall.

The lack of testing means officials are only able to estimate the spread of the virus from the numbers coming into hospital.

As we move forward, it will also enable the government to respond quickly to any speeding up of transmission.

Meanwhile, the antibody element to the work – when a reliable test is available – will also add to all of this.

But surveillance is just one prong in the armoury the government needs to get the UK back to normal life and keep the virus at bay.

A more difficult element to achieve is a widespread and efficient testing regime. This is essential to allow any outbreak in any part of the population to be contained. We still do not have that in place.

Health Secretary Matt Hancock said the research would answer “crucial questions” as policy makers, clinicians and scientists “continue to build up our understanding of this new virus”.

These include improving understanding of the proportion of people who have had the virus without showing symptoms and how long any immunity to the disease lasts.

The answers will refine computer modelling used by scientists to test the impact of easing various lockdown measures before trying them out.

The first results should be available next month.

“Together, these results will help us better understand the spread of the virus to date, predict the future trajectory and inform future action we take, including crucially the development of ground-breaking tests and treatments,” Mr Hancock said.

Antibody testing – those that show if someone has had the virus in the past – is considered crucial in providing an exit pathway from the current lockdown, as well as providing data to those developing a vaccine.

But England’s chief medical officer, Prof Chris Whitty, told Wednesday’s daily Downing Street briefing that there is currently not a test available that Public Health England has enough confidence in.

Earlier this month, the government admitted that none of the 3.5 million test kits it had bought from China at a cost of £20m was usable but insisted it was continuing to work with other potential suppliers.

Scientists at Oxford University are in the process of validating an antibody test, also known as an Elisa test, which will be used in this study.

They are on track to have a “fully validated and an accreditation compliant test” in place by 4 May, according to Prof Derrick Crook, who is among those co-ordinating the programme of work at Oxford University.

Introducing an antibody blood test and surveillance to determine the rate of infection among the public is one of “five pillars” of the government’s testing strategy, designed to suppress the virus and prevent a resurgence of infections later this year.

The government has pledged 100,000 tests a day by the end of April – a commitment First Secretary of State Dominic Raab reaffirmed at Wednesday’s Prime Minister’s Questions.

‘Not going to be eradicated’
The study comes after Prof Whitty warned the UK would have to live with some “disruptive” social distancing measures for at least the rest of the year.

In the “long run” the ideal way out of lockdown would be via a “highly effective vaccine” or drugs to treat the disease, he said.

But he said the chance of having those within the next calendar year was “incredibly small”.

Instead, ministers will have to consider which lockdown measures should remain in place and which could be eased to ensure the best health outcomes.

Wednesday’s figures showed a further 759 people died with the virus in UK hospitals, bringing the total number of deaths to 18,100.

However, Mr Raab told reporters at the coronavirus briefing there was “light at the end of the tunnel” after it was confirmed the UK had reached the peak of infections.

Sir Keir Starmer, making his debut at Prime Minister’s Questions as Labour leader, said the UK had been “very slow and way behind other European countries” on testing

Current statistics on deaths in care homes are likely to be an “underestimate”, Prof Whitty says
All of Germany’s states have announced plans to make face masks compulsory to combat the spread of coronavirus