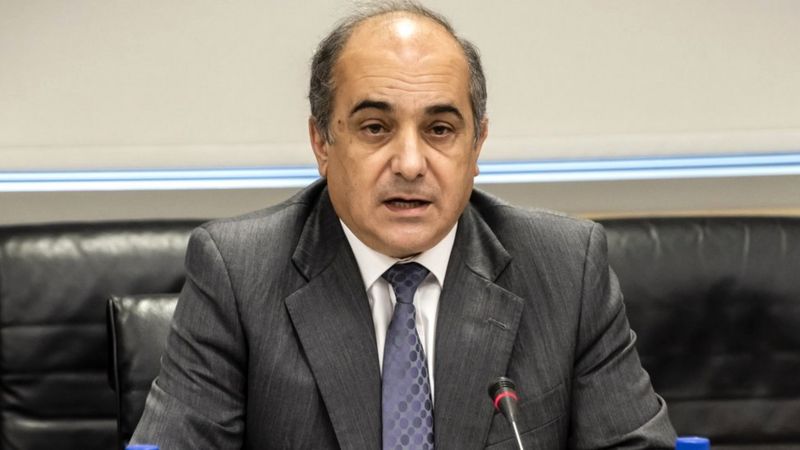 Cyprus is suspending a scheme that grants citizenship and guarantees visa-free travel throughout the EU for those who invest a minimum of €2m (£1.8m).

It comes after Al Jazeera reporters filmed Cypriot officials using the scheme to assist a fictional Chinese businessman with a criminal record.

One of those filmed was Cyprus’s parliamentary speaker, Demetris Syllouris, who said he would step down until an investigation was completed.

The move comes into force next month.

Mr Syllouris, who is Cyprus’s second-highest ranking state official, said he would withdraw from his duties from 19 October.

In the video footage captured by undercover Al Jazeera journalists and released on Monday, Mr Syllouris appears to offer his influence to assist in obtaining citizenship for the fictitious businessman.

On Tuesday, Mr Syllouris released a statement apologising for “this unpleasant image conveyed to the Cypriot public… and any upset it may have caused”.

His announcement came shortly after the government said it had approved a proposal to suspend the scheme – the citizenship for investment programme – following an emergency session on Tuesday.

In a statement posted on Twitter, the office of Cypriot President Nicos Anastasiades said the proposal was put forward in response to “weaknesses” in the scheme that could be “exploited”.

More on the allure of ‘golden passports’
Cyprus, which joined the EU in 2004, currently provides passports to non-EU nationals who make sufficient investments in the country.

Last November, it emerged that fugitive financier Jho Low – a central figure in the global scandal which saw billions of dollars go missing from the Malaysian state fund 1MDB – had obtained Cypriot citizenship in September 2015 and reportedly bought a €5m property in the Cypriot resort of Ayia Napa.

Mr Low is wanted in the US, where prosecutors say he laundered billions through its financial system.

Mr Low has denied any wrongdoing, and his current whereabouts are unknown, although there have been reports of him in various locations.

Cyprus later revoked his “golden passport” and those bought by 25 foreign investors, including nine Russians, eight Cambodians and five Chinese.

Last year, the EU Commission told EU states to tighten checks on non-EU nationals who acquired citizenship through investments. Malta and Bulgaria operate similar schemes to that of Cyprus.

The commission said the programme could be abused and used for tax evasion and money-laundering.

It added that applicants could acquire citizenship of Cyprus, Malta and Bulgaria – and hence EU citizenship – “without ever having resided in practice in the member state”.

EU citizens can move easily throughout the bloc, as well as live and work in another member state without the bureaucratic hurdles that non-EU nationals face.

Some other EU states and the UK offer “golden” residence visas in exchange for large investments.