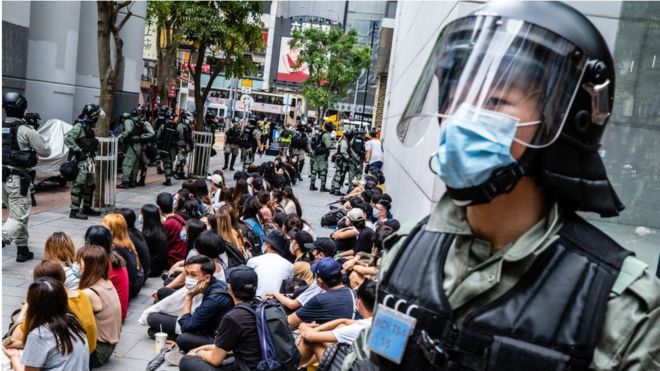 HSBC and Standard Chartered have given their backing to China’s new security laws for Hong Kong.

Both banks made statements saying the proposed law can help maintain long-term stability in the troubled city.

On Wednesday, HSBC’s Asia Pacific chief executive Peter Wong signed a petition backing the law which has been widely criticised.

But this backing comes as Japanese bank Nomura said it was “seriously” examining its presence in Hong Kong.

It is unusual for a bank to enter into political debate, particularly one as controversial as China’s new security laws which many feel could mark the end of Hong Kong’s unique freedoms.

HSBC’s statement noted that the Hong Kong Association of Banks had already issued a statement saying the law would contribute to a stable business environment.

What did the banks say?
Although it is Europe’s largest bank, HSBC has a strong presence in Asia, particularly Hong Kong.

HSBC “respects and supports all laws that stabilise Hong Kong’s social order,” it said in a post on social media in China.

The bank’s full name is the Hongkong and Shanghai Banking Corporation and it has its origins in the former British colony. While HSBC moved its headquarters to London in 1993, Hong Kong is still its biggest market.

Standard Chartered also has a strong presence in Asia. “We believe the national security law can help maintain the long-term economic and social stability of Hong Kong,” it said in a statement.

It added that “the ‘one country, two systems’ principle is core to the future success of Hong Kong and has always been the bedrock of the business community’s confidence”.

Meanwhile, Japanese investment bank Nomura said it was reviewing the scale of its operations in Hong Kong.

The bank’s chief executive, Kentaro Okuda, said that while Hong Kong remained its most critical Asian hub outside Japan, the situation now was “not the same as it used to be” in an interview with the FT.

Hong Kong residents are concerned this will affect free speech and their right to protest. In China this would be seen as subversion. People are also worried about suggestions that China could set up its own institutions in Hong Kong responsible for security.

“The new national security law will deal the most severe blow to the rights of people in Hong Kong since the territory’s transfer to China in 1997,” according to Human Rights Watch.

HSBC had been previously caught up in Hong Kong’s anti-government protests, with its branches vandalised and bronze lion statues outside its headquarters defaced during a protest march in January.

The bank is also facing its own challenges from the coronavirus pandemic with the prospect of thousands of job losses and a significant drop in earnings.

HSBC didn’t respond to a request from the BBC for further comments about the social media post.