Home > News > World > In the Coronavirus, Putin May Have Met His Match 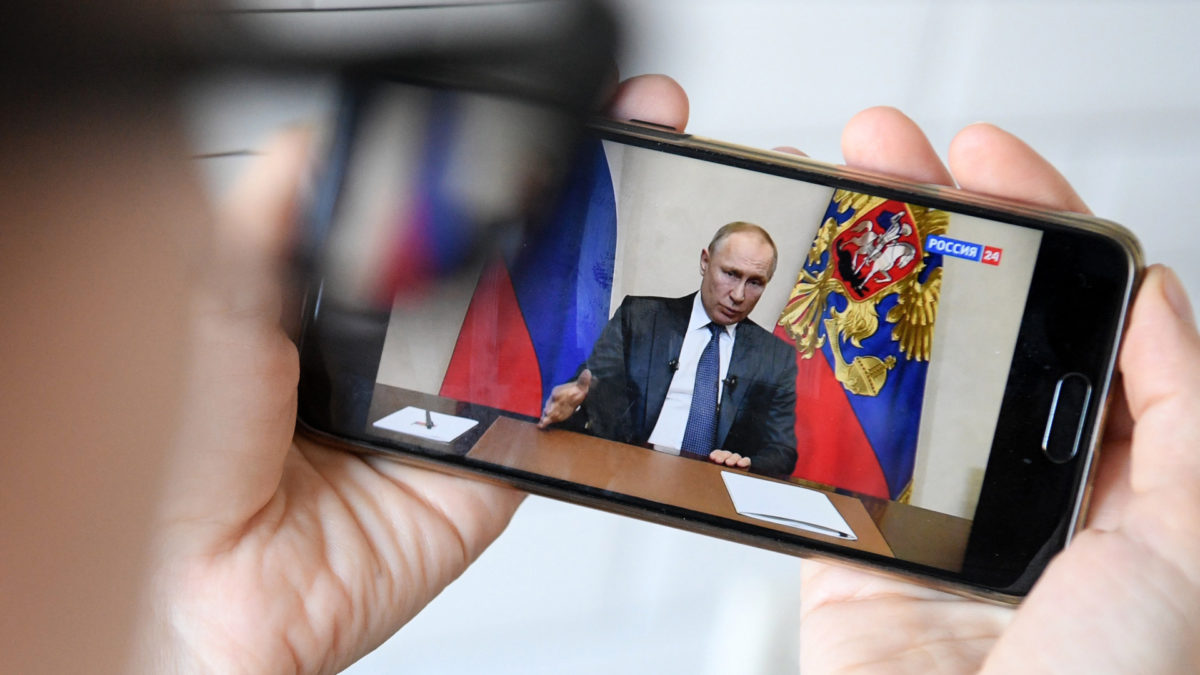 A woman watches a live broadcast of Russian President Vladimir Putin's address to the nation over the coronavirus outbreak, in Moscow on March 25, 2020. (Photo by Kirill KUDRYAVTSEV / AFP) (Photo by KIRILL KUDRYAVTSEV/AFP via Getty Images)
News, World

The Russian leader still wants to make himself president for life. But COVID-19 is fomenting new distrust in the state he built.

Back in January, when Vladimir Putin announced plans to change the constitution as part of a bid to prolong his rule, few obstacles lay in the Russian president’s path.

Today, Putin finds himself in a very different place. Moscow is now under a citywide quarantine, and Prime Minister Mikhail Mishustin is pushing regional governors to adopt similar measures as the coronavirus pandemic has spread, killing tens of thousands of people around the globe and sinking the world into what many analysts predict will be a global recession far worse than the 2008-2009 financial crisis.

And in a sign of the virus’s increasing severity and public concerns over its spread, Putin bowed last week to growing pressure to delay an April vote on extending his rule after being warned that the outbreak in the country was far worse than official data suggested.

For the Kremlin, the stakes could be even higher. Three months ago, despite a falling standard of living and an economy hit by Western sanctions, Putin had succeeded in marginalizing the country’s political opposition and silencing critical media as he refashioned state structures to consolidate his hold on power over the last 20 years. With few challenges left on his path, the Kremlin’s plans to potentially extend Putin’s presidency until 2036 seemed like a fait accompli.

Today, not only does COVID-19 risk overwhelming the country’s underfunded health system, but Moscow must also withstand the added pressure on its finances from an oil price war that it is waging against Saudi Arabia, which could shake its economy as its government shifts from the political considerations of changing the constitution to curbing the rapid spread of the coronavirus across Russia. The growing outbreak now presents an unexpected test for the institutions and the system that Putin has built. While the Kremlin has adapted in recent years to threats both at home and abroad—restructuring its economy to better withstand sanctions, waging a more assertive foreign policy across the globe, and launching a national program to raise living standards—fighting the spread of the coronavirus is one that the Russian system may not be equipped to fully meet.

“You can’t fight against coronavirus effectively in a centralized way. The system needs to prove that it’s efficient enough to deal with a serious challenge like this,” said Nikolai Petrov, a senior research fellow at Chatham House and a professor at the Higher School of Economics in Moscow. “Everyone has serious doubts, so it’s an important crash test.”

For a time Russia remained an outlier as the coronavirus hit other nations around the world. Official numbers remained comparatively low, fueling suspicion that the true number of cases could be dramatically higher. The Kremlin denied accusations that it was massaging its coronavirus statistics, but new testing procedures brought in last week also cleared a testing backlog, and Russia has since seen a spike in cases, which have now reached 1,836 and continue to climb each day. As the number of cases has risen, the authorities have slowly changed strategy. Despite taking strict steps in the winter to halt the spread of the virus from Asia, such as shutting down Russia’s border with China, limiting flights, and monitoring Chinese residents who could be infected, the government has largely resisted the type of measures to contain the coronavirus seen across Europe. It wasn’t until last week—following a choreographed visit to a hospital on the outskirts of Moscow by Putin, where he donned a yellow protective suit—that the response began to change. Later comments made by Moscow Mayor Sergei Sobyanin, who also heads a coronavirus task force, in which he said that official figures were misleading and that Russia was facing a “serious situation” also paved the way for Putin’s shift.

“The fact is that testing volume is very low and no one on earth knows the real picture,” Sobyanin said during a meeting with Putin.

But while the official response has begun to view the spread of coronavirus as a more serious threat, measures taken by the government appear to reflect political priorities over public health and safety concerns. Putin did not use his speech last week delaying the April vote to impose a full-scale quarantine on Russia. Instead the Russian leader announced a week of paid holiday, introduced smaller-scale measures to boost the country’s economy, and insisted that Russians take the spread of the virus more seriously.

“It looks like Putin is not fighting against the virus, but against his decreasing ratings,” said Tatiana Stanovaya, the founder of the political consultancy R.Politik and a scholar at the Carnegie Moscow Center. “The problem of the Russian authorities is that they are afraid to be seen as weak. They think stricter measures will make it look like the state is losing control and can’t manage the situation.”

Russia has now sealed its borders, canceled sporting events, and closed schools, but the type of restrictions that many experts say are necessary for rolling back the virus have been implemented piecemeal by officials in a move to insulate Putin from any political blowback. Moscow’s lockdown brought in over the weekend was issued by Sobyanin as Muscovites continued to go out to bars and restaurants. According to Meduza, an independent Russian news outlet, the decision to shut down the city came as many residents used the paid time off announced by Putin to barbecue and picnic outside. Similarly, Mishustin, the prime minister, is working on the practicalities of how to roll out a nationwide lockdown, keeping Putin’s fingerprints out of public view.

The mixed messaging highlights the tension between the Kremlin’s need to curb the virus without undoing its own political standing in the process. The grand bargain of Putin’s rule has been to provide stability, more efficient governance, and a heightened global standing in exchange for accepting the Kremlin’s authoritarian rule. But declining incomes over the years and public frustration over corruption have eroded that bargain, and the spread of the coronavirus has exposed the public’s distrust of the authorities as they’ve sought to deal with the outbreak.

COVID-19 has already given Russian authorities an opportunity to test new powers and technology, particularly a 170,000-camera facial recognition system in Moscow. Local police already claim to have caught and fined 200 people for breaching quarantine and self-isolation orders in the capital. The government said it is expanding on ways to use the system to track the spread of the coronavirus, but privacy and free-speech advocates worry the government is building up its surveillance capabilities for when the pandemic slows. As part of the lockdown, Moscow city authorities have also begun rolling out a QR-code system, where residents need to scan a code in order to leave their home during the lockdown.

Currently, Moscow is the center of the outbreak in Russia, but should the virus spread extensively to other regions, the authorities could look to use other new technologies to manage panic and political fallout, said Andrei Soldatov, a Russian investigative journalist and expert on the Russian security service’s use of surveillance technology. In particular, the use of the Kremlin’s so-called sovereign internet, which could allow the authorities to firewall off the internet from the rest of the world, but also close off the internet from a particular region to the rest of the country.

“If you had a big influx of infected people in an area, this could lead the authorities to shut down the internet in a region to prevent information of an outbreak from spreading around the country,” Soldatov said. “We don’t see it yet, but it’s a direction things could move in.”

In the meantime, managing public opinion appears to be a top concern. Russian state media and television continue to put an optimistic slant on the official handling of the outbreak and are keen to highlight the failures by foreign governments in handling the virus. Likewise, a great deal of coverage was devoted to medical equipment that Russia dispatched to Italy—a gesture designed to show Moscow’s confidence in its own approach to the crisis, despite the fact that Italian officials later said 80 percent of the aid was “useless.” Beyond that, the authorities have looked to distort and manipulate information over the coronavirus in the country. Several elderly patients infected with the virus later had their deaths reclassified as due to an underlying condition, such as a blood clot, not from COVID-19, in order to keep the death toll low.