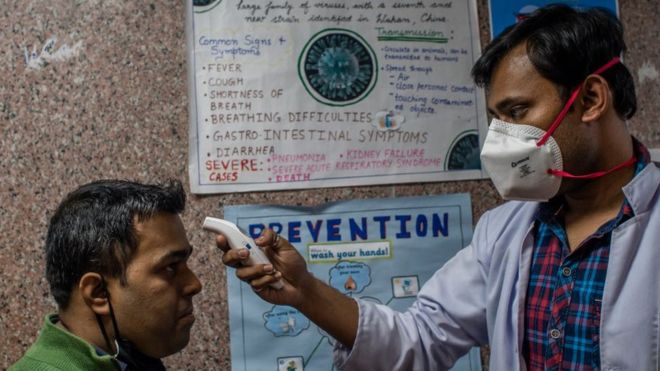 India is at a critical stage in its fight against coronavirus as fears of community transmissions rise. During its lockdown frontline workers are still going out every day to win what one doctor described as “a war India can’t afford to lose”. The BBC’s reports.

Experts have warned that India still has time to contain what otherwise could be a catastrophic outbreak, putting millions of lives at risk.

Many fear that the country’s healthcare system may not be able to cope with a massive outbreak. Around 130 million people will head to hospitals even if 10% of India’s population is infected, according to conservative estimates.

And the country only has 0.5 hospital beds per 1,000 people, one of the lowest ratios in the world, according to the Organisation for Economic Co-operation and Development.

So, India is pinning its hope of containing the outbreak on social distancing and a complete lockdown of major cities and towns. And the success is down to the efforts of unknown but selfless workers. 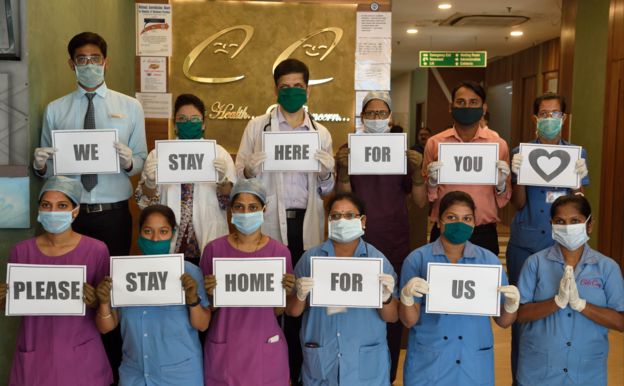 And medical staff are at the forefront of these efforts.

Dr Taarini Johri, a medical officer at a government-run hospital in the western city of Ahmedabad, said the medical sector “was not prepared to deal with the crisis”.

“Doctors and nurses working in the coronavirus wards have good safety equipment. But doctors who are screening patients don’t have the same despite the fact that we are at most risk,” she said. “A lot of doctors are at risk. We desperately need more safety gear.”

Priya Srivastava, a doctor at a hospital in the northern city of Lucknow, said “the time to act is now”.

“We need to build makeshift hospitals quickly. If community transmission aggravates, we will have to be ready for it – it will be unlike any scenario we have seen before or we are trained for,” she said.

She added that the flu season is making matters worse.

“There is so much panic. People are reaching hospitals with minor coughs and colds, thinking they are infected with Covid-19. So, we need to keep hammering the right message about how to identify coronavirus symptoms.”

Dr VK Batra, who has been practising medicine in Delhi for more than three decades, says doctors are “doing everything we can”.

“I have just one key message for people – stay at home. Just do this for a few weeks and we may have a fighting chance to control the outbreak.” 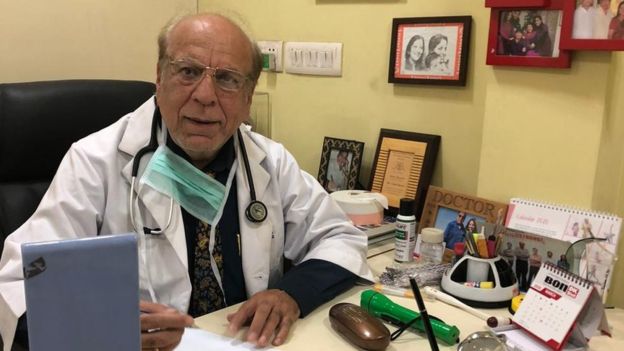 “Some of us have to stay away from our families for days so we can continue to see patients. That’s stressful, but we don’t have any other option. We are fighting an enemy we didn’t expect to fight or even see coming.

“We are not getting personal protection equipment as quickly as we should,” he said. “We are the frontline soldiers and you can’t win a war without them.”

India has now allowed private labs to conduct coronavirus tests, and some lab technicians are being trained. Amardeep Chaudhary is one of them. 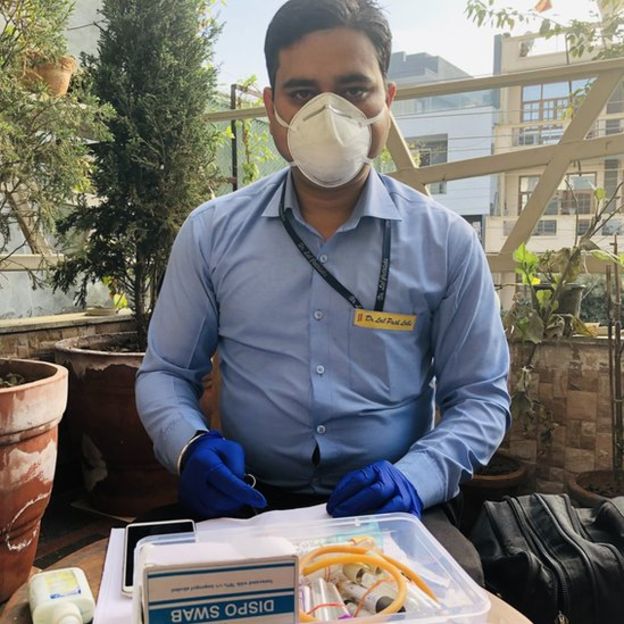 “I am used to going to people’s homes to collect samples. We take care to protect ourselves. But coronavirus is something different. I am scared for sure, but I won’t give up,” he said.

While doctors are fighting the battle inside hospitals, it’s the police who have to enforce the lockdown outside.

Rahul Srivastava, a senior officer in Uttar Pradesh, says the first two days were extremely tough. “People are not used to staying indoors. They would just not understand the importance of the lockdown.”

In most areas he says police are following the policy of “explaining, persuading and requesting people to stay indoors”. 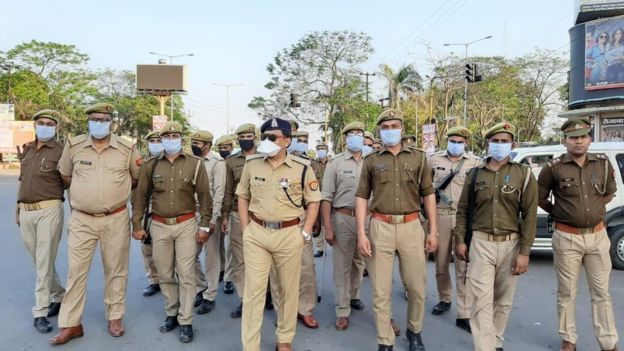 “We are stricter when people get adamant about going out. It’s a tough job and doubly challenging as we have to keep people safe and also ensure the safety of our own personnel.

“We will be on the streets 24/7 to ensure the lockdown is enforced.”

And then there are key workers almost hidden in plain-sight: security guards and refuse collectors.

Sonu Kumar, who collects rubbish in a Delhi suburb, says his first instinct after the lockdown was to rush to his village but his boss made “me realise the importance of our job”.

“Hygiene is key in fighting the virus. But we are scared – people not covering their rubbish bins. We see used tissues, masks and gloves in their open bins. We are using protective gear but it still scares us.

“Just think of our safety. Please seal it. We are doing this for you.”

Vijay Dubey works as a security guard in Noida near Delhi and has had “a hard time dealing with people”.

“I understand when people want to go out to buy medicines and food. But it makes no sense when they say they are bored and want to go for a drive. 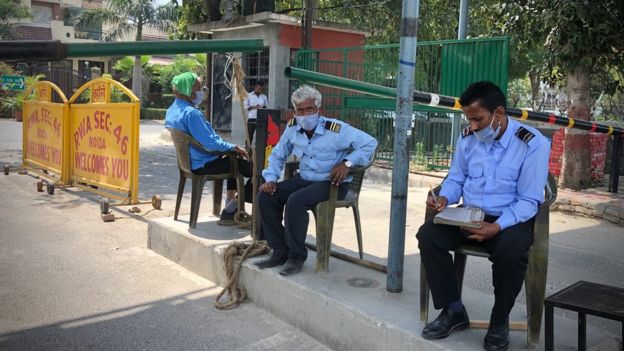 “They are educated and yet they don’t understand. We are risking our own safety by being out – the least people can do is to just stay at home.”.

India has shut down trains and flights. But pilots and railway staff have been doing their jobs until now.

National carrier Air India flew several rescue flights to evacuate Indians from Europe and Iran. But some crew believe their safety was sometimes compromised, staff from the airline told the BBC.

“Before flights were suspended on all international routes, pilots and crew returning from foreign countries were only given four days rest before being asked to fly on a domestic route.

“This was extremely risky for us and for the passengers. I just hope none of us picked up any infection during layovers in Europe and the US,” one said. “We don’t mind serving in the time of national crisis – all we asked was that the 14-day quarantine period should be followed.”

A spokesman for the airline denied the allegations, saying it had “followed all protocols”.

Then there have disturbing allegations of discrimination by some members of the public against cabin crew and railway staff who are suspected of carrying infection.

One flight attendant said the neighbours “refused to talk to my mother when I was away”.

“Even the neighbourhood grocers refused to give us the essentials,” she said.

“We interact with least 100-150 people every day but we were not given any protective gear or sanitisers,” one employee, who did not wish to be identified, told the BBC. “We kept working because so many passengers wanted to reach their villages before the lockdown.

“Now our neighbours suspect we may have picked up the coronavirus infection. All we need is unity and humanity to win this war.

“Otherwise, we will lose and we can’t afford that,” she said.