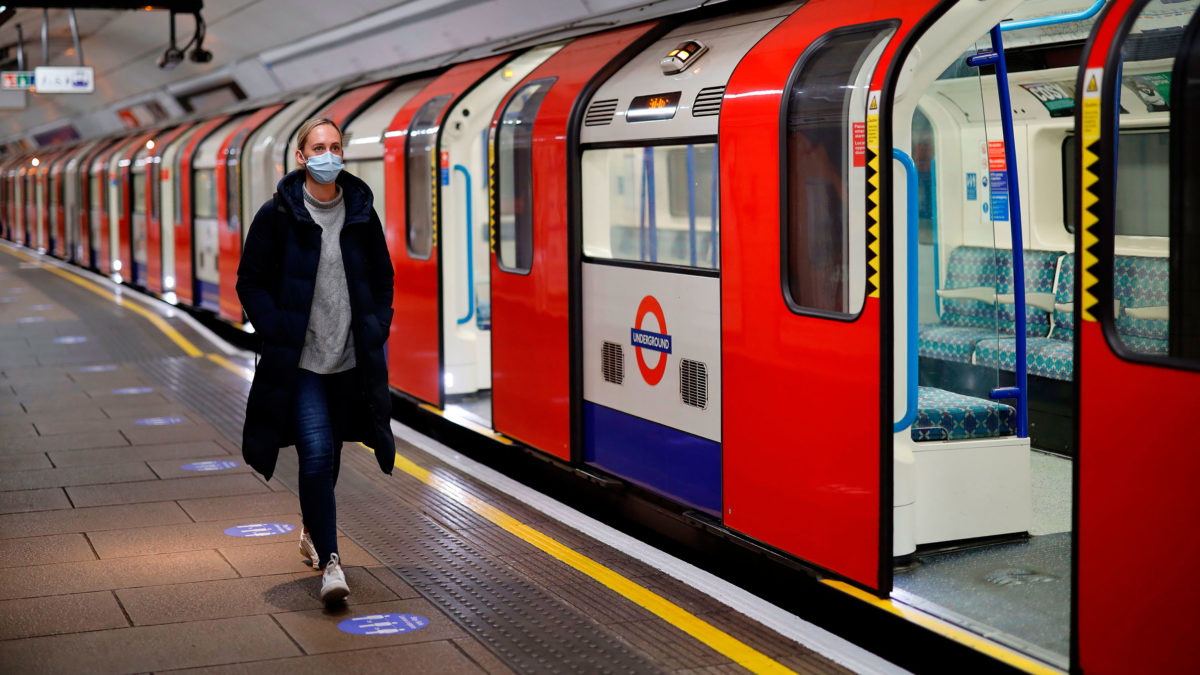 A woman wearing PPE (personal protective equipment), including a face mask as a precautionary measure against COVID-19, walks along the platform alongside a London Underground Tube train in the morning rush hour, on May 11, 2020, as life in Britain continues during the nationwide lockdown due to the novel coronavirus pandemic. - British Prime Minister Boris Johnson on May 10 announced a phased plan to ease a nationwide coronavirus lockdown, with schools and shops to begin opening from June 1 -- as long as infection rates stay low. (Photo by Tolga Akmen / AFP) (Photo by TOLGA AKMEN/AFP via Getty Images)

London’s transport operator is in a “critical” financial situation and needs to reach an agreement with the government in the next 48 hours, London’s Deputy Mayor for Transport Heidi Alexander said Tuesday.

Alexander told a Transport For London (TFL) finance committee that the local government body may be forced to issue a Section 114 notice, which is the equivalent of a public body going bust, if an agreement is not reached.

“It’s clear the situation is now critical … and that there is just no sustainable way forward without direct government support,” Alexander said.

Across London, tube travel has been reduced by 95% and bus travel by 85% during the coronavirus outbreak, TFL said in a statement on Monday. On April 24, the organization announced it had furloughed 7,000 staff — around 25% of its workforce — under the government’s coronavirus job retention scheme. It said this would save it an estimated £15.8 million ($19.3 million) every four weeks.

However, a TFL document submitted to Tuesday’s committee says its loss from the “steep decline” in revenue for the full year is anticipated to be over £4 billion ($4.9 billion) and the remaining gap to balance its proposed Emergency Budget for 2020/21 is around £3.2 billion. It says TFL is in ongoing discussions around how this should be funded with the Department for Transport and HM Treasury.

“We have done everything possible to help reduce the spread of coronavirus by working with the Government to rapidly reduce ridership to low levels not seen for 100 years while keeping transport available for essential journeys, such as NHS or supermarket staff heading to work. This was the right thing to do and has saved lives. But given that 80 per cent of our income is from fares, it has had a highly significant impact on our finances and will do for the coming months,” a TFL spokesperson told CNN on Tuesday.
“This is why our finance committee will discuss a proposed Emergency Budget that prioritises what is essential for maintenance of basic services to support coronavirus government planning. This is an interim measure until we can propose a revised budget later in the year. But it is clear that the long term impact of the coronavirus will mean that we need financial support now and into the future so that we can support the recovery of London and the UK. We are in constructive discussions with the Government over the necessary financial support, and a successful conclusion to these is now extremely urgent,” the statement continued.