After repeatedly mocking President Trump for suggesting on March 19 that hydroxychloroquine could be an effective treatment for coronavirus, media organizations have begun acknowledging that the drug — now approved for emergency use to treat coronavirus by the Food and Drug Administration (FDA) — may be useful after all.

Journalists and top Democrats have beaten a similarly hasty retreat from their previous claims that Trump’s ban on travel from China was both xenophobic and ineffective. But media outlets’ misinformation on hydroxychloroquine was unique because it involved not simply policy disagreements but also suggestive medical advice and directives that could have dissuaded some from seeking certain treatments.

“Malaria Drug Helps Virus Patients Improve, in Small Study,” The New York Times reported this week, adding: “A group of moderately ill people were given hydroxychloroquine, which appeared to ease their symptoms quickly, but more research is needed.”

Michigan Gov. Gretchen Whitmer, a Democrat, went from threatening doctors who prescribed the drug with “administrative action” to requesting that the federal government ship her state some. Other state leaders have followed suit, including Nevada Gov. Steve Sisolak, also a Democrat.

It wasn’t always considered acceptable to use that kind of optimistic rhetoric, however.

“Trump peddles unsubstantiated hope in dark times,” read a March 20 “analysis” by CNN’s Stephen Collinson. Saying Trump was “adopting the audacity of false hope” and embracing “premature optimism,” Collinson charged that “there’s no doubt he overhyped the immediate prospects for the drug” because the FDA refused to give a timeline on approving the drug to treat coronavirus. 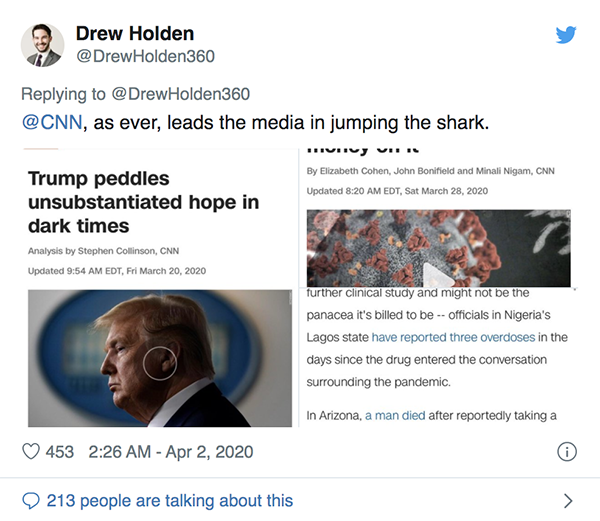 “Trump is giving people false hope of coronavirus cures. It’s all snake oil,” read one Washington Post headline. Added the Post’s editorial board: “Trump is spreading false hope for a virus cure — and that’s not the only damage.”

“The most promising answer to the pandemic will be a vaccine, and researchers are racing to develop one,” the paper insisted, although it is not staffed with medical experts. “Mr. Trump’s inappropriate hype has already led to hoarding of hydroxychloroquine and diverted supplies from people with other maladies who need it. His comments are raising false hopes. Rather than roll the dice on an unproven therapy, let’s deposit our trust in the scientists.”

“There are no approved therapies or drugs to treat COVID-19 yet, but the president hypes preliminary chloroquine trials at White House briefing and unproven remedies on Twitter,” the paper wrote, just days before the FDA would approve the drug.

Communications strategist Drew Holden flagged these and numerous other examples of media misinformation on the matter in a lengthy Twitter thread. 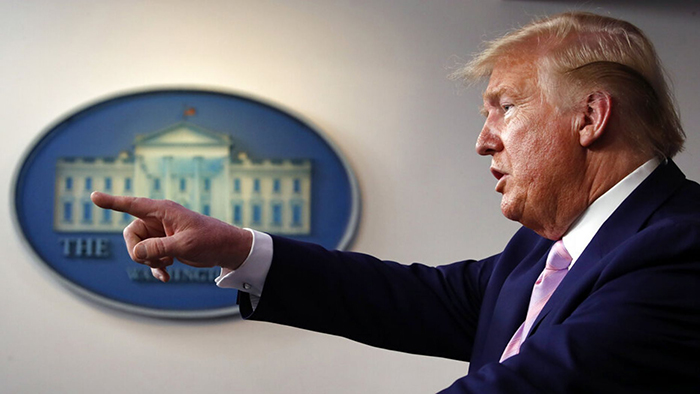 The New Yorker pondered “The Meaning of Donald Trump’s Coronavirus Quackery,” observing that Trump’s “pronouncements are a reminder, if one was needed, of his scorn for rigorous science, even amid the worst pandemic to hit the U.S. in a century.”

The New York Times’ Kurt Eichenwald reported that a “Louisiana MD” on the “front lines of the COVID-19 fight” had told him that “Hydroxychloroquine doesn’t work” and that “amateurs who dont [sic] understand research” were driving up demand for the drug. (“Count me skeptical of your source here, Kurt,” Holden wrote.) 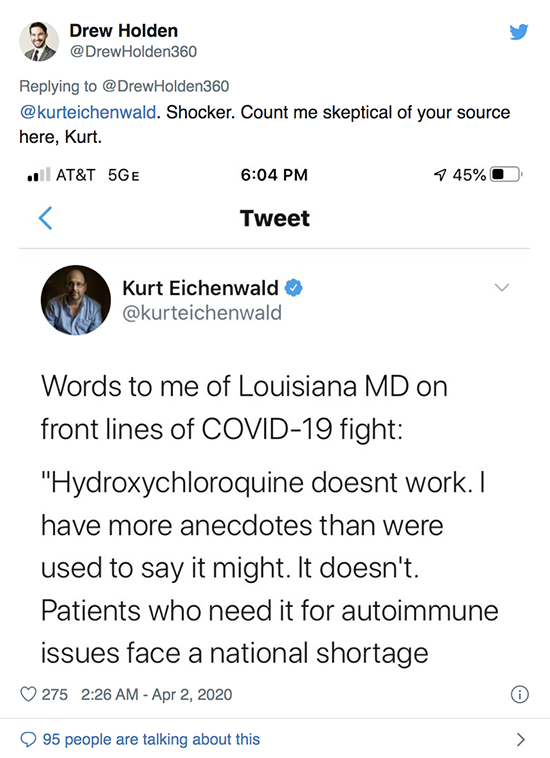 Vox mocked Trump’s “new favorite treatment” for the drug, and said the evidence is “lacking” that it works.

Meanwhile, it has emerged that the Arizona woman who said she and her husband drank fish-tank cleaner to ward off coronavirus has donated heavily to Democrats and acknowledges she’s not a Trump supporter — despite news reports that she ingested the dangerous drug because she trusted what she thought was the president’s advice.

The 61-year-old woman, whose first name is Wanda but has asked for her full identity to be withheld, survived the ordeal. Her 68-year-old husband, Gary, did not. Wanda has said that she and her husband each took a “teaspoon” of the fish-tank cleaner; medical toxicology results and a police investigation were pending.

“I saw it sitting on the back shelf and thought, ‘Hey, isn’t that the stuff they’re talking about on TV?'” Wanda told NBC News, referring to the chloroquine phosphate in her fish-tank cleaner.

On March 19, Trump had touted anecdotal evidence that the antimalarial drug chloroquine could be used as a treatment for coronavirus during a White House briefing, calling it a possible “game-changer.” In fact, the Food and Drug Administration has approved the drug on an emergency basis, even though various media reports had mocked Trump’s suggestion.

However, the woman and her husband ingested the additive chloroquine phosphate, which has been used in aquariums to kill microscopic organisms that might harm fish and other aquatic animals.

Several media organizations that confused the chloroquine medication with chloroquine phosphate later issued corrections. The New York Times, though, all but accused Trump of recommending the same substance in the fish-tank cleaner.

Nevertheless, Wanda drew national attention by claiming that Trump had suggested she consume the fish-tank cleaner with her husband, and that she did so to avoid “getting sick.”

“My advice is don’t believe anything that the president says and his people because they don’t know what they’re talking about,” Wanda told NBC News’ Vaughn Hillyard.

Additionally, Fox News has reviewed a Facebook page apparently belonging to Wanda, which was first identified by the Twitter user Techno Fog.

“Your psycho prez is in [t]own, are you going to see him?” Wanda wrote on Facebook on Feb. 19, by way of wishing a friend a happy birthday. Trump was in town at a rally in Phoenix, Ariz., on that day.

Coronavirus may be most infectious when symptoms are mildest, small study finds

Latin America is losing the battle against coronavirus