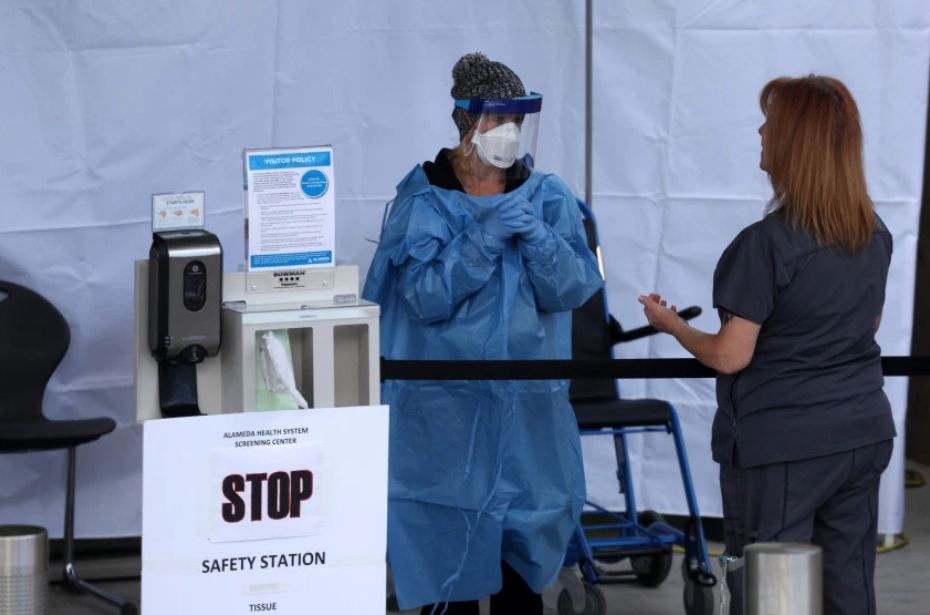 Two weeks into the Bay Area’s first-in-the-nation public lockdown to slow the spread of the deadly new coronavirus, doctors and local health officials are anxiously debating a question with literal life-or-death consequences: Is it working?

By some accounts, there are encouraging signs. Contra Costa County Health Officer Dr. Chris Farnitano said Monday that his county hasn’t seen a spike in ambulance transports and that hospitalizations for COVID-19 have only slowly risen.

At the University of California San Francisco, doctors took to social media over the weekend to note that the weeks-long climb of new cases reported to the city’s public health department appears to be bending downward, or flattening.

And officials in hard-hit Washington state, as well as Louisiana, are showing enthusiasm for the results of social distancing.

“These data should be regarded as a ‘cheer from the sidelines’ in this marathon we’re on together,” said Dr. Timothy Dyster, a UCSF resident physician, explaining the encouraging signs he noted Sunday on Twitter — that the city’s shelter-in-place order may be flattening the trajectory of new infections.

“It’s been hard work and sacrifice, and it will continue to be, but there might be some early evidence that those efforts are paying off,” Dyster said. “So please, keep staying home and keep washing your hands!”

But even the most optimistic of experts are quick to insist there are too many factors — and too much at stake — for the public to relax. In fact, Bay Area officials on Monday extended the region’s stay-home orders through the end of the month, and even President Trump, eager to get the country back to work, relented over the weekend to suggest Americans practice social distancing until the end of April.

The “flattening the curve” discussion has forced political leaders, such as California Gov. Gavin Newsom, into a delicate balancing act.

“We’re in the middle of this, and I think it would be too easy for us to assert a belief at this moment about what has or has not worked, except to say this: We know what does work, and that’s physical distancing,” Newsom said Monday. “And we believe very strongly the stay-at-home order has helped advance our efforts in reducing the stress on the system that we believe would have already materialized in more acute ways had we not advanced those protocols when we did.”

Newsom noted that over the last four days, the rate of hospitalizations statewide has doubled, from 746 to 1,432, and the number of those cases requiring intensive care tripled from 200 to 597.

But doctors at UCSF who have been bracing for a surge of coronavirus patients have recently echoed Dyster’s optimism on Twitter.

“It hit me today … we are in a flattened curve,” associate professor Dr. Jahan Fahimi tweeted Friday. “While the surge is surely still coming, we have time. Each day we are more prepared.”

Dr. Robert Wachter, chairman of the UCSF medical department, tweeted Sunday that it “seems like we’re uber-prepped for a surge that may not be coming, which’ll be great.”

“We are monitoring the numbers,” Colfax said. “The thing is, is that when this disease takes off, if it does take off, it takes off very rapidly in communities just like we saw in New York. … I simply do not know if our aggressive actions early on … have had the intended effect. I certainly am hoping and praying that that is the case. We still need the data to confirm that.”

In Contra Costa County, Farantino also noted “encouraging” signs that “the physical distancing is helping in Contra Costa” but said it was too early to celebrate.

“Our cases in Contra Costa are doubling every four to five days, and our hospital rates are doubling about every seven days, which is better than what New York experienced — so that is encouraging,” Farnitano said. “But we don’t want to sound overly optimistic. … We should have a better picture of the effect of the order in the weeks ahead.”

Health officials in Santa Clara, San Mateo, Marin and Alameda counties have so far been silent on the issue.

While Bay Area officials extended the region’s stay-at-home order Monday for another month, Newsom’s statewide order is in effect “until further notice,” and he has suggested people should not expect it to lift any time soon.

“It’s bought us time to prepare,” Newsom said. “But I want to make this point. When we see a tripling of the ICU beds, when you see a doubling of the hospitalizations just over a four-day period, that’s a point of not just of consideration, it’s a point of obvious concern.”

Other hard-hit areas that also imposed strict measures to stop people from mingling are showing signs they are working. Like California, the state of Washington, where the first U.S. coronavirus case was confirmed Jan. 20 — five days before the first California case in Orange County and 11 days before the first Bay Area case in Santa Clara County — imposed progressively stricter measures, including a March 23 stay-home order.

Those measures, officials in Washington say, are delivering results. Seattle reported the rate the virus has spread has slowed, and hospitals have not been overwhelmed. Seattle Mayor Jenny Durkan told the New York Times over the weekend that “we slowed the transmission,” and Gov. Jay Inslee told the newspaper “there is evidence that doing the aggressive measures can have a benefit.”

In Louisiana, where Gov. John Bel Edwards ordered residents to stay home at least until April 12, data analysis consultant and former CIA officer Jeff Asher tweeted Monday that there are encouraging signs in that state as well.