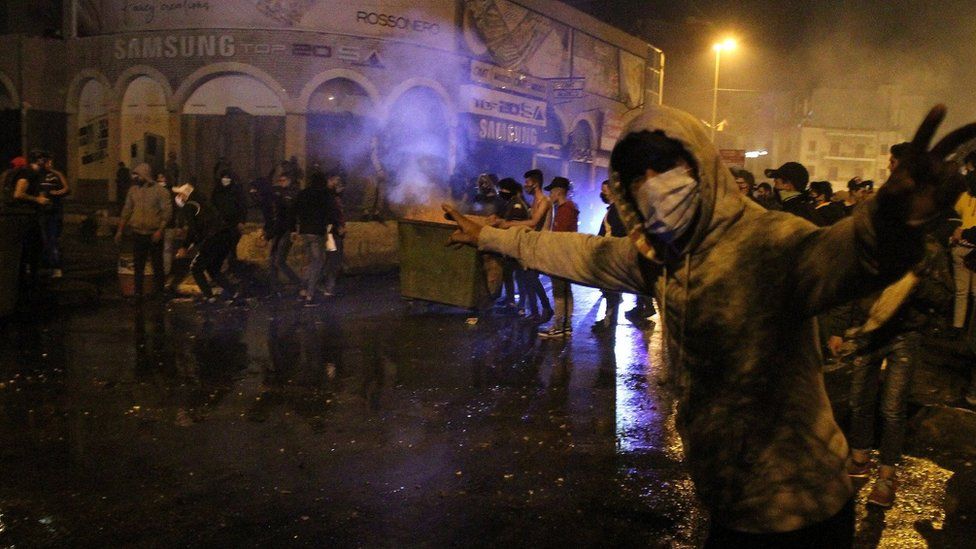 A man has died after protesters angry with a total coronavirus lockdown and dire economic conditions clashed with riot police in the Lebanese city of Tripoli for a third consecutive night.

Omar Tayba, 29, was among 220 people injured during the unrest. His brother said he had been shot.

The round-the-clock curfew imposed this month to halt a surge in Covid-19 cases has worsened Lebanon’s economic crisis.

People are forbidden from leaving their homes unless they are essential workers, and they must rely on deliveries from supermarkets for food.

Many have also been left without an income in a country where a third of the workforce is unemployed and a large proportion relies on the informal sector.

The government is providing some financial assistance to 230,000 families, but half the population of 6 million is estimated to be living under the poverty line and almost a quarter is living in extreme poverty.

“We are here to demand food. People are hungry,” Mohammed Ezzedine, 20, told AFP news agency at Wednesday’s protest in Tripoli, Lebanon’s second largest city. “It’s time for people to take to the streets.”

The state-run National News Agency (NNA) reported that demonstrators attempted to break into the city’s municipal government building and threw petrol bombs and stones at riot police outside. The police used water cannon and fired tear gas to try to disperse them, it said. 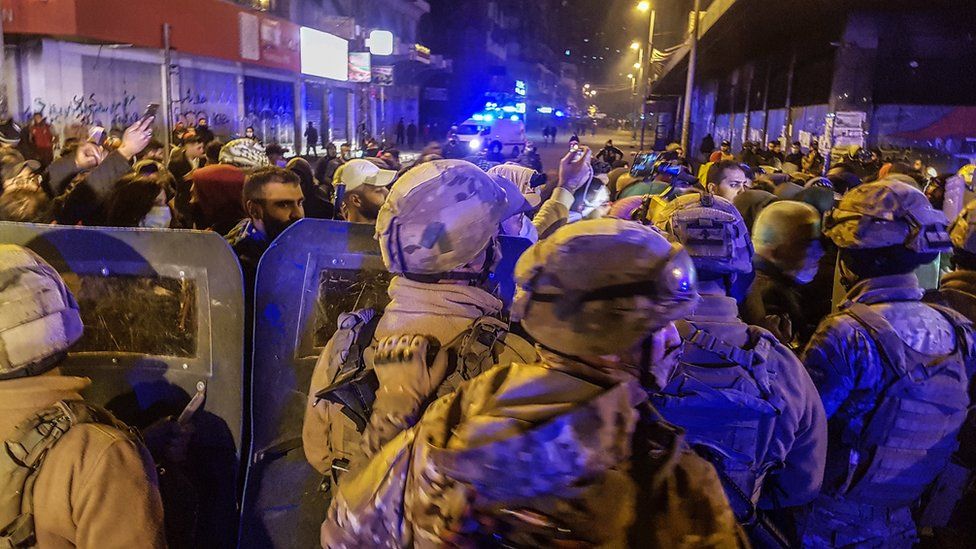 The Internal Security Forces said hand grenades were thrown at its officers, and that at least nine were injured.

According to the NNA, a total of 226 people were injured and that a man from Bab al-Tabbaneh area, whom it did not identify, later died of his wounds in hospital. The Lebanese Red Cross said it treated 67 people at the scene and took 35 others to hospital for treatment.

Omar Tayba’s brother, Ahmed, said he had not been taking part in the demonstration when he was shot.

“My brother was in Tripoli watching the protests when he was hit,” he told AFP news agency. “He was transferred to hospital and died this morning.”

Tripoli residents have taken to the streets for three nights to protest against the total lockdown that began on 14 January and was recently extended to 8 February.

The government had hoped the drastic action would prevent the fragile healthcare system being overwhelmed. However, hospitals are now reporting that their intensive care units are running at 94% capacity. Essential equipment and medicines are also in short supply.

More than 289,000 people have tested positive for Covid-19 and 2,553 have died in Lebanon since the start of the pandemic. But 116,000 of those cases and 1,144 of the deaths have been reported in the past month, according to data compiled by Johns Hopkins University.

Health officials blame the surge on the government’s decision to relax restrictions ahead of Christmas and New Year, with bars and nightclubs allowed to open for the first time in months.

The pandemic has compounded Lebanon’s economic crisis, which saw a projected 19% decline in GDP in 2020, triple digit inflation, and mass business failures and job losses.

The huge explosion at the port of Beirut in August, which killed more than 200 people, is also estimated to have caused up to $4.6bn (£3.4bn) of damage to buildings and infrastructure.

Lebanon’s finances and public services have also been strained by the influx of 860,000 refugees from neighbouring Syria. They now account for a quarter of its population.