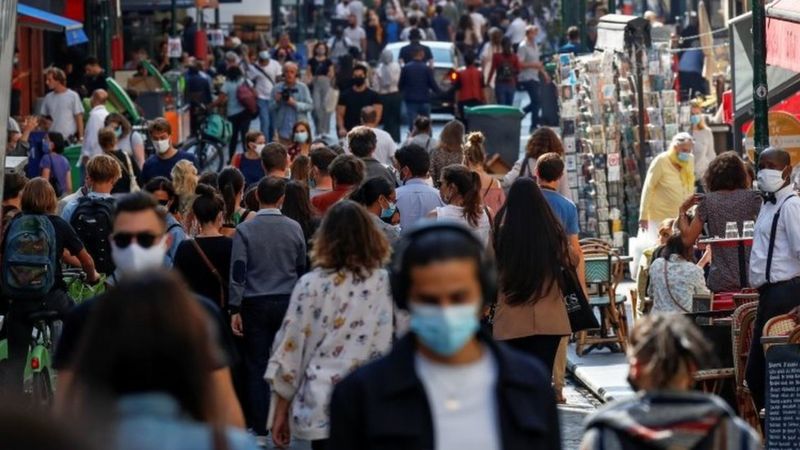 Olivier Véran said infection rates in the capital and its suburbs are rising and a decision on imposing new restrictions will be made on Sunday.

He added that a “total closure of bars” could be needed in the capital.

France, one of many European countries that are seeing a rise in cases, recorded more than 13,000 infections on Thursday.

The World Health Organization (WHO) has warned that surging figures in Europe should serve as “a wake up call”.

In a news conference on Thursday, Mr Véran said the Paris region passed three thresholds qualifying for a maximum alert on Thursday.

One of these was the number of infections, which has now surpassed 250 per 100,000 people.

“We need a few days to confirm the trends, but if they are confirmed, we’ll have no choice but to put it on maximum alert, from Monday,” he said.

According to Mr Véran, more than 30% of beds in Paris’s intensive care units have been filled with Covid-19 patients.

He warned that if the maximum alert was put in place, there would be no more family reunions and bars would be closed. Bars and restaurants in the region already have to close by 22:00.

Similar restrictions have already been introduced in Marseille. Last Monday, Mr Véran announced bars, restaurants and gyms would close in the southern city for at least two weeks amid an upsurge in cases.

On Thursday, France recorded 13,970 cases and 63 deaths. More than 31,986 people have died in the country since the pandemic began, according to data from Johns Hopkins University.

Elsewhere in Europe, the Spanish government has ordered a partial lockdown in the capital Madrid. Under the restrictions, residents will not be allowed to leave the area unless they have to make an essential journey.

The UK has taken Poland and Turkey off its no quarantine list. Those arriving from the two countries from 04:00 BST (03:00 GMT) on Sunday will have to self-isolate for 14 days.

Poland’s infection rate has risen, while the UK government said it removed Turkey over concerns about the way the country reports its data.

EU warns Turkey of sanctions over 'provocations' in Mediterranean