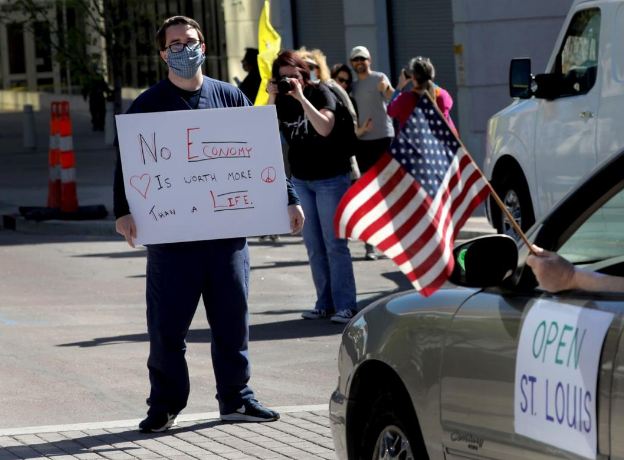 Many more protesters in vehicles participated, with drivers honking their horns and passengers waving signs.

Parson’s order lasts through May 3, and he has said the state would “reopen” in phases. The protests resembled recent demonstrations in other states that have restricted movement as officials respond to the new coronavirus pandemic.

Anne Calzone, 61, of Maries County, held a sign that said “Make 1984 Fiction Again,” referring to the dystopian George Orwell novel. She said the stay-at-home order infringed upon her constitutional rights.

“I think they can advise, they can give us information, but not tell us we must (stay at home) — not in a free country,” Calzone said.

At one point, a person waved a U.S. flag and a “Reopen Missouri” sign out of the side of a school bus. The bus lettering said it was from New Hope Baptist Church in Independence, Missouri.

Neely is running in the August Republican primary for governor against Parson, former auditor candidate Saundra McDowell and Raleigh Ritter of Seneca.

“People are frustrated that the government has stepped on their toes,” Neely said. “Government has no business telling people who are healthy to stay home.”

Josh Schisler, a former lobbyist who was listed as a host of the event on Facebook, was seen walking Neely toward the front of the crowd, where speakers gathered. He also filmed Neely as the candidate gave a media interview.

Schisler later said he wasn’t working for Neely, but said he had worked with Neely since 2013 on medical-freedom issues. He said Tuesday’s rally was not a campaign event.

Clayton protest
In Clayton, about 60 people protested outside the Lawrence K. Roos County Government Building from 3:30 to 4:30 p.m.

Some waved Gadsden flags decrying government overreach; others clutched signs that said, “Models are wrong, open MO!” and “My Body, My Choice!” Few stood the recommended six feet from others, and only about half wore masks.

Meanwhile about 30 vehicles made loud, honking loops throughout downtown Clayton, many of them displaying the U.S. flag or excerpts from the Bill of Rights. The windows of a gold Buick Century claimed in green paint: “Covid is treatable.”

A woman who said her name was Tammy, who stood with a boy of about 8, held a sign that said, “‘Regressive Autism’ (Caused by Vaccine Injury) DESERVES ‘Essential’ Therapy Services — Person to Person.”

“Teletherapy doesn’t work,” she said. “He can’t get the connection he needs face to face. He’s not getting any school work, or anything. I’m doing the school work at home.”

Rick Seebeck, of Kirkwood, said he attended the protest because people need to get back to work. He said he has not been able to work at his job as caddy master at Bellerive Country Club.

“I think they should open it cautiously with preventive stuff in place, but get the place opened back up,” he said. “There’s a lot of people hurting. It’s sad to see, really.”

But the protest also drew a small counter-protest to show the potential danger of opening up the economy. Alex Cummings, 26, of St. Louis, a nurse at St. Louis University Hospital, held a sign that said: “No Economy Is Worth More Than A Life.”

‘Stay at home’
Parson put all of Missouri under a stay-at-home order on April 6.

Dr. Anthony Fauci, who is leading the federal government response to the pandemic, has said all states should have shelter-in-place orders.

According to the Centers for Disease Control and Prevention, limiting “face-to-face contact with others is the best way to reduce the spread of coronavirus disease 2019 (COVID-19).”

Parson, while asking Missourians to remain home, had refrained from issuing an order requiring people to stay at home when possible. His previous order had limited gatherings statewide to no more than 10 people.

“There comes a time when we have to make major sacrifices in our lives. Many of us make sacrifices each and every day, but now more than ever, we must all make sacrifices,” Parson said April 3. “This is not about any one individual person. This is about our families, friends, neighbors, and the entire state of Missouri. For the sake of all Missourians, be smart, be responsible, and stay home, Missourians.”

He said last week the state would begin to reopen on May 4 as officials work to expand the state’s testing capacity. Parson, asked about the protests Monday, suggested he and protesters were already at least “somewhat” on the same page.

“Right now in the state of Missouri, we are in the process of starting to reopen our state, which I think is somewhat what the protesters want, and some other issues they have,” he said.

Parson’s stay-at-home order says all individuals “shall avoid social gatherings of more than ten (10) people” and that “every person” in Missouri “shall abide by social distancing requirements, including maintaining six feet (6’) of space between individuals.”

The social distancing rules don’t apply to families and essential workers, according to the order.

On Tuesday, Dr. Randall Williams, director of the Department of Health and Senior Services, when asked whether the protesters had violated the law, said his order “carries the force of law.”

“If they deviate from that, then yes, it is a deviation from the law,” Williams said.

“Every single person needs to fight in the best way that they can,” Lovasco told the crowd. “And ultimately sometimes that … means that you disobey.”

Mike O’Connell, spokesman for the Department of Public Safety, which oversees the Capitol Police, said there were no arrests Tuesday.

County orders
In addition to Parson’s stay-at-home order, dozens of counties and cities have issued their own rules. Fifty local public health agencies have issued orders, according to a count maintained by the Department of Health and Senior Services.

Iron, Reynolds and Shannon counties, south of St. Louis, earlier this month ordered most nonresidents to avoid traveling through the scenic counties, something not mentioned in Parson’s order.

“They can do stricter guidelines,” Parson said.

Frances Vermillion, public health director for Reynolds County, said the local order would remain in effect after the governor’s expires.

“He’s turned it over to the counties. He says we know better,” she said.

“I think if they are reasonable about it, no, it’s not a problem,” she said. “I think they’d just have to be realistic and might monitor the distancing — that kind of thing.”