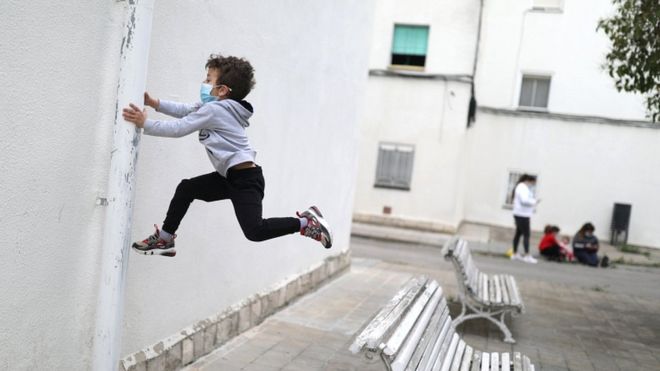 Spain, which has been one of the countries worst hit in the coronavirus pandemic, has reported its lowest daily death toll in more than a month.

Its health ministry said earlier that 288 more people had died of the virus, the lowest number since 20 March.

The figure is a steep drop from the 378 deaths recorded on Saturday.

On Sunday, children under the age of 14 were allowed to leave their homes for the first time in six weeks. They are now allowed outside for one hour a day.

The health ministry said the total number of fatalities now stood at 23,190.

Fernando Simon, director of the Spanish Health Alert and Emergency Co-ordination Centre, said: “For the first time in a long time, we are below 300.

“Although it may be hard to give these statistics, it’s a figure which indicates a clear, positive direction in the evolution of the epidemic.”

What has changed for Spanish children?
The new lockdown conditions allow Spain’s 6.3 million under-14s to leave their homes each day for a total of one hour between 09:00 and 21:00, but without going further than one kilometre (0.6 mile).

Those over 13 are allowed to carry out errands for their parents, as has been the case throughout the lockdown.

However, parents tend to prefer not to send their children out, especially to enclosed places such as supermarkets, where there is more risk of contagion. 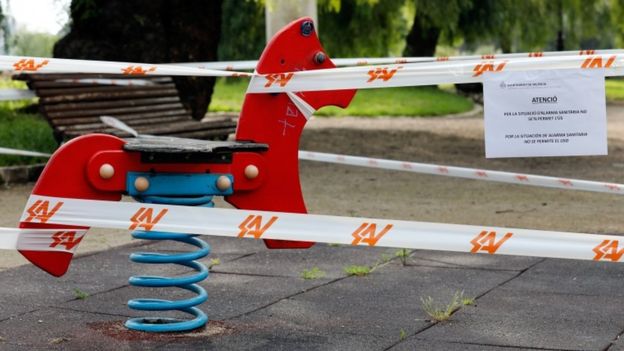 Bicycles, skates and skateboards are allowed, but public parks remain off-limits. The lockdown’s other conditions remain in place for the moment and schools remain closed; the government is considering loosening the lockdown further in the second half of May.

Psychologists have welcomed the lifting of restrictions for smaller children, saying that even one hour outside each day can provide an important boost to their state of mind.

“The change of routine, being outside and being in the sunlight – all of that is extremely important,” says Laura Piñeiro, a psychologist and the director in Madrid of the charity Asociación Bienestar Desarollo.

On the Spanish island of Gran Canaria, resident Carla Marquez said letting the children out was “totally necessary” after 42 days.

“It has been super emotional, the first thing my child told me when she opened her eyes was ‘Can I go out to the street today?’. We have to value the small things, the small things in life which apparently we didn’t.”

Another resident, Borja Iglesias, said it was the right decision for children’s physical and mental health.

“Perhaps it comes a bit late but it is a necessary measure. I think all families are very happy to take this step.”

Ramaphosa urges SA not to be alarmed at coronavirus rise