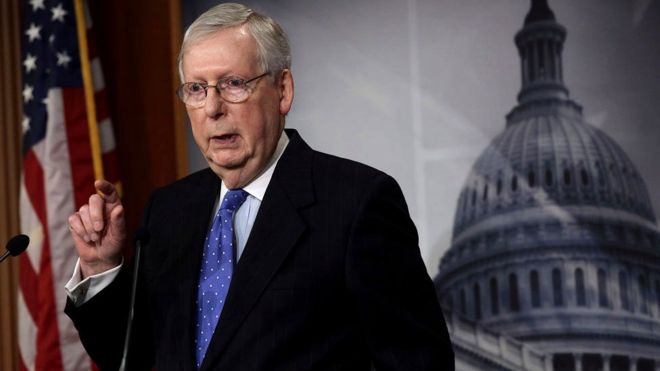 US President Donald Trump and the Senate have agreed a massive economic relief package worth more than $1.8 trillion (£1.5tn).

The package includes money to bail out industries that have been affected by the coronavirus crisis.

Republican Senate Majority leader Mitch McConnell described it as a “wartime level of investment” in the economy.

Markets surged in the US on Tuesday in anticipation of a deal, and shares rose in Europe and Asia on Wednesday.

On Wall Street, the Dow Jones jumped by 11.4% on Tuesday – its biggest one-day gain since the Great Depression.

Markets in Europe were also trading higher, with London’s FTSE 100 index up 3.5%. 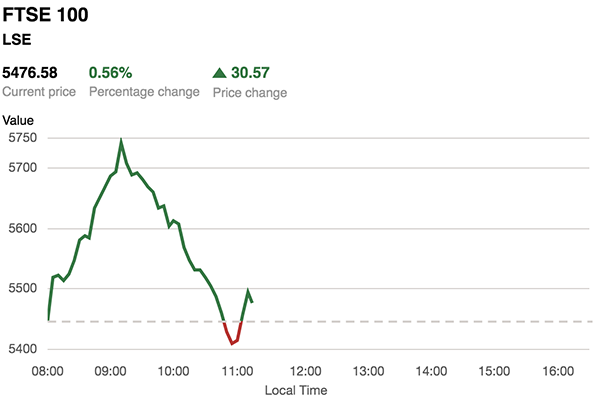 Full details of the deal agreed in the US will not be published until later on Wednesday. However, it is expected to contain measures to help people pay bills if they are laid off because of the virus, expand unemployment assistance by $250bn and get $350bn in emergency loans to small firms.

Mr McConnell said it would also “stabilise” key industrial sectors and give money to hospitals and other healthcare providers which were having difficulty getting equipment.

Senate Democratic Leader Chuck Schumer called the package “the largest rescue package in American history”. He said it was a “Marshall Plan” for hospitals. “Help is on the way, big help and quick help.”

Separately on Tuesday, President Trump said he wanted to get the economy up and running again by Easter.

He said he was speaking to the Coronavirus Taskforce about when to open the US for business and that the Easter weekend -12 April – presented a “beautiful time, a beautiful timeline” and that he hoped to be able to open at least some sections of the country.

Reacting to news of the stimulus package, Tom Stevenson, investment director at fund manager Fidelity International, said: “It’s good news, but we’re not out of the woods yet.

“When markets are falling, you get these big rallies but you shouldn’t get stuck on that. They do bounce around in these situations.”

The latest swing in share prices continues a period of unprecedented volatility as markets react wildly to the economic impact of the coronavirus pandemic.

This month alone has seen the Dow having the five biggest daily gains and five biggest falls of its 135-year history. 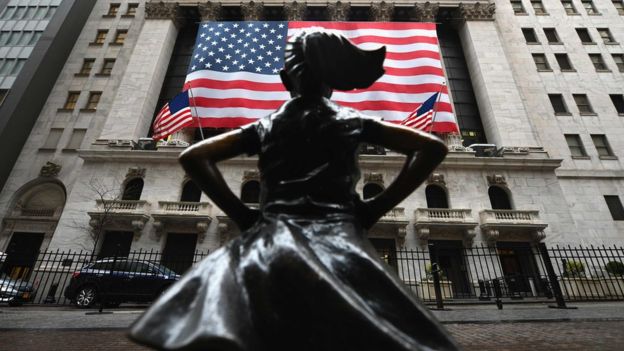 Many countries are now working on stimulus packages to support their economies, but these plans have received mixed responses from investors.

The US rescue package follows five days of intense negotiations to try to agree a deal that will provide aid for American workers and businesses.

Before it becomes law the deal must get through the Republican-controlled Senate, the Democrat-controlled House of Representatives and be signed by President Trump.

The US central bank, the Federal Reserve has already announced $4tn in extra lending to help stimulate the economy in the face of the coronavirus.

Last week, Treasury Secretary Steve Mnuchin predicted that US unemployment could reach 20%. On Thursday, the Treasury Department will release last week’s new jobless claims, and the numbers are expected to be in the millions.

A Goldman Sachs report estimated that the nation’s gross domestic product in the second quarter could shrink by 24%, dwarfing the previous 10% record decline in 1958.

Global spread
America is more than midway through a 15-day attempt to slow the spread of the virus through social distancing.

Nearly 19,000 people have died with coronavirus across the planet since it emerged in China’s Wuhan province in January, and more than 420,000 infections have been confirmed.

Southern Europe is now at the centre of the pandemic, with Italy and Spain recording hundreds of new deaths every day.

Governments around the world have responded by locking down societies in the hope of slowing the spread of the virus.