Israel’s military has opened fired on Hezbollah militants who were trying to “infiltrate our territory”, PM Benjamin Netanyahu has said.

The Israel Defense Forces (IDF) said up to four militants crossed the border in the Mount Dov area, part of the Israeli-occupied Syrian Golan Heights.

A Hezbollah statement said it had not engaged in any clashes, instead blaming a “nervous” enemy.

The area has been tense for days after the death of a Hezbollah fighter.

He was killed in an alleged Israeli air strike in Syria. Israel, which has neither confirmed nor denied it carried out the strike in the early hours of last Monday, had warned Hezbollah not to retaliate.

The IDF said “the terrorists fled back to Lebanon” after being shot at on Monday.

Mr Netanyahu, in a televised address, said he took a “grave view of this attempt to infiltrate our territory”.

He added: “Hezbollah and Lebanon bear full responsibility for this incident and any attack from Lebanese territory against Israel. Hezbollah should know that it is playing with fire.”

Israeli media, citing unnamed military sources, said the Hezbollah cell was planning to attack an IDF post. The reports said Israel had been tracking them and its forces opened fire once the militants crossed the so-called Blue Line – the UN-recognised boundary between Israel and Lebanon.

Reports say the Israeli army fired artillery shells in their wake. There are no reports of casualties on the Lebanese side. 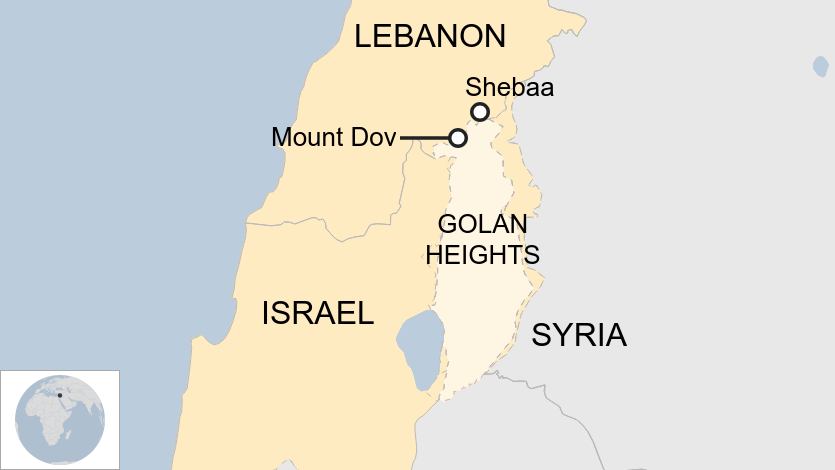 Hezbollah, which is heavily armed and funded by Israel’s arch-foe Iran, is the most powerful armed force in Lebanon alongside the Lebanese army. It operates predominantly in the south of the country and along with its political allies is an influential force in the government.

The Hezbollah statement said its fighters had not been involved in any clash, shooting or infiltration on Monday, saying “it was only one party, which was the fearful, anxious and tense enemy”.

However, the statement warned that a response to the death of its fighter was “definitely coming”.

Israel and Hezbollah are bitter enemies who fought a month-long war in 2006 after Hezbollah killed eight Israeli soldiers and abducted two in a cross-border raid.

The ensuing conflict killed some 1,191 people – mostly civilians – in Lebanon, and 121 soldiers and 44 civilians in Israel.

A flare-up has been in the offing for days now along one of the region’s most combustible frontiers.

Exactly what these militants had in mind when they crossed a few metres from Lebanon into Israeli-controlled territory isn’t clear. They were armed with assault rifles and planning an attack, says Israel.

So far there are conflicting reports in Lebanon as to whether this was the Hezbollah revenge for the death of one its fighters last week.

The group itself is playing the entire incident down and saying retaliation will still come. It is far from certain this current “round” of fighting is over.

And the bitter enmity between the two sides will go on: Israel seeks to emasculate Hezbollah’s Iran-backed plans for a new arsenal of high-tech rockets, while the Lebanese group derives its core support from showing strength against Israel.