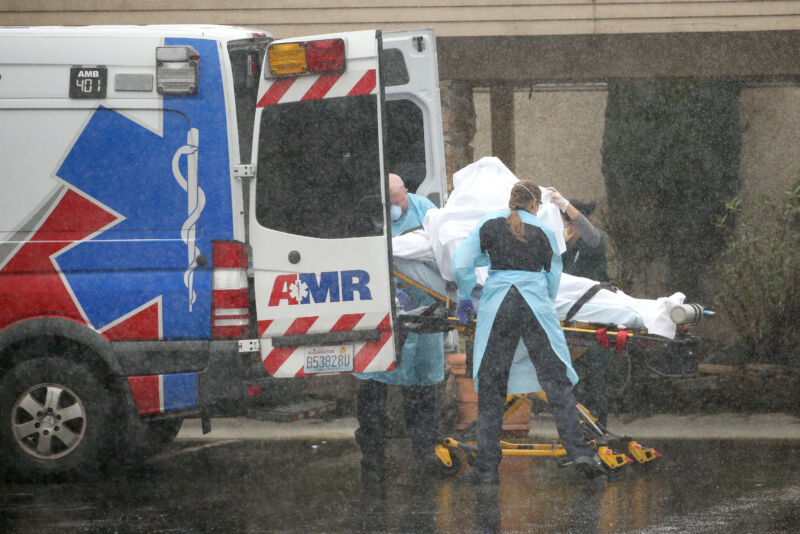 KIRKLAND, WA - MARCH 07: A patient is shielded as they are put into an ambulance outside the Life Care Center of Kirkland on March 7, 2020 in Kirkland, Washington. Several residents have died from COVID-19 and others have tested positive for the novel coronavirus. (Photo by Karen Ducey/Getty Images)
Coronavirus, News, USA, World

The U.S. topped 1,000 coronavirus deaths in a single day for the first time Wednesday, a daily death toll more than double that of two of America’s most deadly illnesses – lung cancer and the flu.

Death counts from the virus are difficult to keep up to date, but the Johns Hopkins coronavirus database – whose sources include the World Health Organization, the U.S. Centers for Disease Control and Prevention, the European CDC and the National Health Commission of China – shows that the U.S. hit 1,040 cases Wednesday at 10:25 p.m. ET. Since the virus’ first appearance in the U.S. in late January, 5,116 people have died and more than 215,000 have been infected.

The previous high mark for a single day in the U.S. was Tuesday, with 504 deaths.

Some researchers say the daily death toll could more than double – to 2,200 or more – by mid-April. That figure would eclipse heart disease, the nation’s No. 1 killer with about 1,772 deaths per day, according to the CDC.

“Our country is in the midst of a great national trial,” President Donald Trump said in a White House briefing on the virus. “We’re going to go through a very tough two weeks.”

Lung cancer kills 433 people each day in the U.S. – that’s the same number of seats on a Boeing 747 airplane, according to the Lung Cancer Foundation of America. Breast cancer kills about 116 Americans a day.

The flu, a chronic killer that the nation has come to expect in yearly cycles – and the reason millions of Americans get flu shots – killed an estimated 508 people per day in the U.S. during the 2017-18 flu season, the nation’s worst in the last decade, according to the CDC. This year’s flu season has recorded an average of 383 deaths per day, CDC figures show.

While health officials say COVID-19 is considered a flash medical event in that it is unlikely to maintain its deadly hold for more than three or four months, the 1,000 threshold is a significant one because it shows just how potent an unforeseen outbreak can be on the U.S. medical system.

It also raises questions about COVID-19’s possible deadly effects over time. Anthony Fauci, a member of the White House Coronavirus Task Force, has cautioned that the virus could become a recurring event, much like the flu. He said that the U.S. needs to get ready for the next cycle, possibly to occur in the fall of 2020.

“We really need to be prepared for another cycle,” Fauci said.