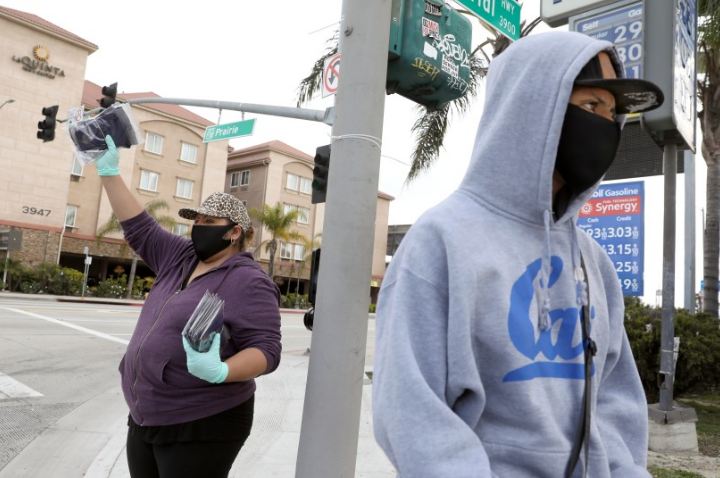 As the coronavirus continues to wipe out livelihoods, with myriad industries frozen and millions of Californians now estimated to be out of work, some are finding novel ways to pay the bills until the crisis passes, or to repurpose their expertise in the fight against the virus.

Today’s Column One feature tells the story of a Redondo Beach family that has found an entrepreneurial niche in street-level mask sales. Brenda Mendez made shrimp fajitas at a mariscos restaurant until COVID-19 forced it to close. Her 15-year-old son, David, was in school. Now they’re hawking $5 masks — acquired in bulk from an acquaintance who sews them — at an intersection in Hawthorne.

“She said, ‘I need to find something to pay the bills, the stress was killing me, I couldn’t just be home doing nothing,’” said Brittny Mejia, who wrote the article. “I don’t think this would have been her first pick. I don’t know that street vending would be at the top of the list.”

[Read the story “She lost her job because of coronavirus. Now she and her son sell masks on a street corner” in the Los Angeles Times]

Mejia found the story through photographer Gary Coronado, who came across the mother-son pair last week. Mejia, who had been reporting from home for weeks, observed them as they worked and visited their home, taking notes on her phone. “There are so many people right now who have no way of paying bills,” said Mejia, who has previously written about housekeepers who have seen their hours slashed as a consequence of the coronavirus. “It was a clear example of people trying to adapt to that. This is the first story I found where people have found a way to make this work.”

Elsewhere, some businesses are sending their specialized equipment into battle. Over at the Marina del Rey-based KAA Design, the big 3-D printers are used to produce architectural models in projects for the firm’s clients, which include A-list celebrities. Now they’re busy turning out masks for distribution to the Keck Hospital of USC and other hospitals. Once printed, the masks are outfitted with HEPA filters and straps.

The firm’s president, Grant Kirkpatrick, is on the board of the USC architecture school, which has a volunteer network (by the latest count) of some 200 people, with some 200 3-D printers. Said Kirkpatrick: “It just seemed like a no-brainer to switch gears and keep people healthy.” A leader of the volunteer network is Alvin Huang, director of graduate architecture at USC, who said he had already enlisted “an army” of architects in the effort. The story is told by Times arts and culture writer Deborah Vankin, who quotes Huang as saying: “Architects have 3-D printers and know how to use them.”

[Read the story “From Julia Louis-Dreyfus’ house to N95-like masks: Architects join the COVID-19 fight” in the Los Angeles Times]

Up at UC Berkeley, a team of doctors and engineers is working to jury-rig sleep apnea machines as ventilators for COVID-19 patients. And a Santa Rosa cannabis business is shifting to the production of hand sanitizer.

Times columnist Mary McNamara, meanwhile, muses on the challenges of parenting in the age of Zoom meetings and the “universal coronavirus-mandated stay-at-home office,” and how the “BBC Dad” is now a widely resonant archetype.

L.A. STORIES
A new UCLA poll finds pervasive anxiety about COVID-19 among Angelenos, with 78% of polled L.A. County residents saying they are “very” or “somewhat” concerned about the virus infecting them or a family member. Economic anxieties are also sky-high. “People view this as an existential threat,” said Zev Yaroslavsky, the retired L.A. County supervisor who oversaw the poll. Los Angeles Times

Los Angeles County reported 29 new corornavirus deaths, bringing the county total to 198. But in a state where the death toll is more than 450, there is cause for hope, such as signs of a slowing growth rate in parts of the Bay Area. Los Angeles Times

Flattening the curve: California has not seen death on the scale of hot spots like New York or Italy, but officials caution Californians not to expect virus-curbing restrictions to be lifted soon — probably not for weeks or months. Los Angeles Times

Gov. Gavin Newsom’s decision to lend 500 state-owned ventilators to New York and other coronavirus hot spots outside California has caught some local officials in his own state off guard as they scramble to acquire the much-needed medical equipment, particularly in Riverside County. Los Angeles Times

In Riverside, county officials say that nearly 100 residents of the Magnolia Rehabilitation and Nursing Center will be relocated for their safety because 13 employees failed to appear for work Tuesday and Wednesday. The facility had seen an outbreak of COVID-19 among among patients and employees.

Coronavirus cases in Italy drop to 98,467 as the spread continues to stabilize