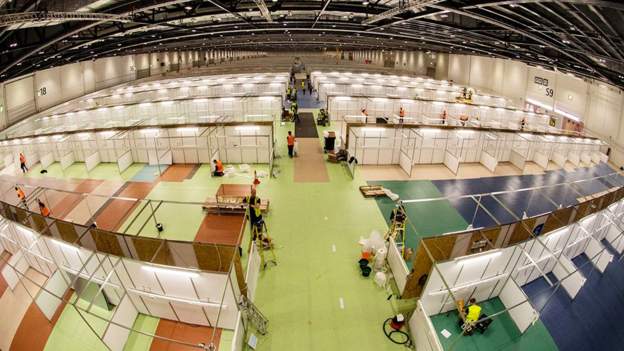 The first of the government’s new Nightingale hospitals will officially open in London later this morning.

East London’s ExCeL exhibition centre has been converted into the temporary hospital, with space for 4,000 beds.

In nine days, the 87,328 square metres of double exhibition halls, have been fitted out with the framework for more than 80 wards, each with 42 beds.

The Prince of Wales, who recently completed self-isolation after testing positive for coronavirus, will open the new medical facility virtually – via video-link.

What does being furloughed mean?

It’s a word that’s been creeping into conversation but you may never have heard of it until recently.

Being furloughed means being kept on a company’s payroll even though you are not working.

The UK government’s furlough scheme has been designed to support firms that have been badly hit by coronavirus and to prevent mass unemployment.

It will temporarily help pay the wages of people who can’t do their jobs, to help companies retain them.

How the outbreak is testing EU unity

The coronavirus crisis really brings into question what the European Union is all about.

Clearly not a United States of Europe, as eurosceptics have often claimed. Far from it.

Right now, every European government is struggling to protect its population, its jobs, its health and its economy.

But rich europhile countries like Germany are not yet digging deeper into their pockets to help out poorer Italy and Spain.

Therein lies the question: what does “European union” really mean in a crisis like this?

What’s the latest from Europe?

In France the government is bringing in measures to stop people travelling over Easter, with checks being introduced at stations, airports and main junctions. More than 400 patients in France have been transferred by high-speed train, or TGV, for treatment since 18 March.

The number of deaths in Germany has risen to more than 1,000. It now has more cases than China, according to figures from Johns Hopkins University
On Thursday, Spain recorded its highest single-day rise in fatalities as 950 new deaths were recorded. More people have died of coronavirus in Spain than anywhere apart from Italy
The president of the EU Commission, Ursula von der Leyen, has said that talks are under way on whether to extend EU border closures after Easter
A migrant camp and a passenger ferry moored off the port of Piraeus have been identified as the main sources of coronavirus in Greece. Of the 380 people on board the ferry, 119 tested positive while 24 migrants at the Ritsona camp near Athens were also found to have the virus, officials say 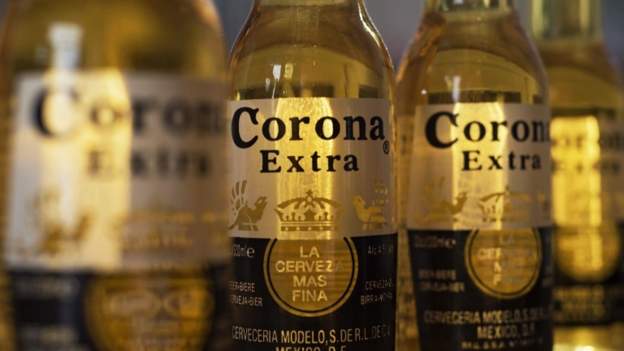 The Mexican brewer behind Corona beer is temporarily halting production owing to the coronavirus pandemic.

The brand has been the punchline for jokes throughout this crisis owing to its somewhat unfortunate name.

An online rumour even said sales in the US had dropped significantly, but this was later denied by the company that owns the brand.

In fact, the decision to stop brewing Corona in Mexico has nothing to do with its name.

Grupo Modelo, which produces the beer, has been declared a non-essential business by the government. This means its work has been suspended until 30 April as part of measures intended to stop the virus from spreading.

The brewing group will stop producing Corona, which is exported to 180 countries, from Sunday.

Mexico has more than 1,500 confirmed infections and at least 50 deaths have been linked to the virus so far.