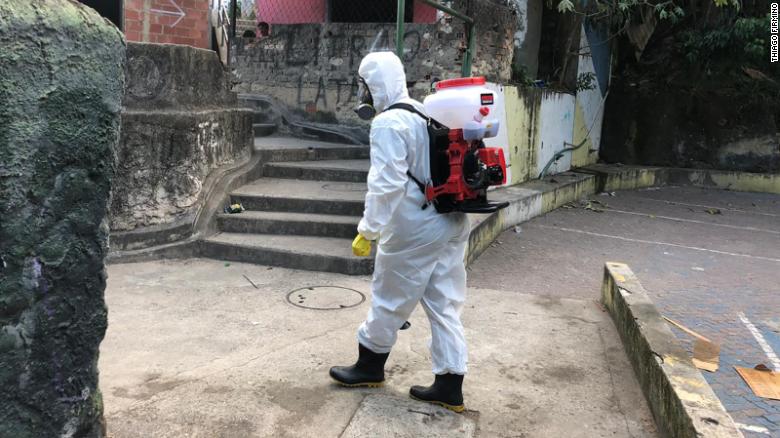 When the coronavirus first emerged, it seemed like a distant threat to Brazil and the country’s sprawling and impoverished favelas. But as the virus spreads across the South American nation, one favela resident is taking it upon himself to protect the neighborhood.

Thiago Firmino, 39, heard the early reports and decided to find some equipment to protect him and the community of the Santa Marta favela in Rio de Janeiro. “I started keeping an eye on it when it was still in China and thought, if it’s out of control there who knows what could happen here,” Firmino told CNN during a telephone interview.

The community activist and entrepreneur bought two disinfectant sprayers and two white body suits that he found in a local paint shop. He already had a gas mask, purchased in the past to protect himself from police tear gas during anti-government protests.
Last weekend, Firmino suited up and started spraying bleach on the side streets, alleys and nooks of his favela in balmy 80-degree heat. Rio’s sanitation service, Comlurb, has been cleaning many of the city’s bus stops, train stations and other areas of high circulation since March but Firmino said he has not seen them in Santa Marta or heard of them working in any other favela.
According to the latest figures from the Brazilian Health Ministry, over 15,000 people have been infected with the coronavirus and 800 people have died. The number of cases has been increasing sharply, with health officials warning the high point may be between April and May.

An estimated 13 million people live in Brazil’s poverty-stricken and densely-populated favelas. In Rio, they are built on hills where even access to clean running water can be a challenge. Products like hand sanitizers are often too expensive as many residents subsist on minimum wage or less and depend on jobs that have been impacted by the pandemic.
Sebastiao Soares, a local vendor from City of God, the favela made famous by the 2002 film of the same name, told CNN he shares his 400-sq foot home with six other people including his three children. He usually sells beverages on Rio de Janeiro’s beaches for a living, but had to quit after a state government ban last month. Despite being high-risk as a diabetic who suffers from hypertension, Soares told CNN he would still work if he could.

Confused guidance
Guidance on social-distancing in Brazil in general has been confusing. State and local governments in some of the country’s hardest-hit areas have been promoting social-distancing with online campaigns and having firefighters and police in the streets urging people to stay indoors. In Rio de Janeiro, governor Wilson Witzel extended quarantine measures in most of the state’s major cities through the end of April and urged people to stay home.
“We are still in the early stages of this pandemic. People need to understand that we need to stay home,” Witzel said during a press conference Tuesday. “This is not the time to be out in street, except for those essential activities.”
The measure applies to schools, Rio’s beaches and tourist sites, such as the Christ the Redeemer statue.
According to a recent Datafolha poll, 76% percent of the population supports social-distancing policies in order to curb the spread of the coronavirus.
However, President Jair Bolsonaro has continued to push back on social-distancing policies in recent weeks, dismissing the coronavirus as a “little flu” and saying Brazil will suffer more if the economy collapses.

Sweden challenges Trump -- and scientific mainstream -- by refusing to lock down

Amid Unrest, America Is Unrecognizable to Its Allies