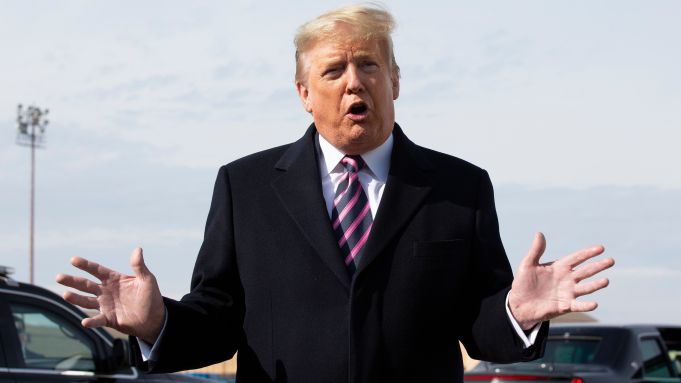 On Monday evening, President Trump stressed what he called the need to reopen America for business even as he said the government also would continue tackling the spiraling coronavirus pandemic.

The White House’s team will make an assessment after next week as to how effective social distancing and other mitigation measures have been in stifling the spread of the virus, said Vice President Pence.

It’s possible at that time that Washington could lift some of the restrictions that have paralyzed the economy, Trump and Pence suggested, but they offered no guarantees and the details weren’t clear.

Trump said that he didn’t know when life would get back to normal but said it would be “a lot sooner than three or four months” and that he didn’t want the pandemic to disrupt the nation so badly that today’s economic foundering curdles into a depression.

“We’re not going to let the cure be worse than the problem,” Trump said.

Trump has come under pressure to at least give a date by which life might start to get back to normal. The isolation, quarantines and closures imposed to slow the spread of the coronavirus have crippled many sectors of the economy.

The nation is eight days into this 15-day period, Pence said: “We’re doing this.”

It wasn’t clear precisely what assessment, or by whom, would take place at the end of the period and what metrics would be involved with deciding about preserving social distancing and other mitigation measures — or relaxing them.

Dr. Deborah Birx, a leader on the White House’s coronavirus response task force, said only two countries have climbed to the peak of infection curves and then subsided: China and South Korea.

Those were eight-to-10-week curves, she said.

Infections in other nations, including the U.S., are still climbing. And compounding the problem in monitoring the virus within the United States is that it was introduced in different places at different times, Birx said.

Washington state, she said, is about two weeks ahead of New York state. So notwithstanding Trump’s optimism about a quick return to normalcy, Birx’s description suggested that different parts of the country would continue to climb through their infection curves at different rates, requiring different responses.

Trump, all the while, sought to talk up what he said would be the quick return to business as usual, which he said would “not take months.”

The president described his vision for a coming period of weeks in which America might both try to get back to work but also continue to fight the virus: “We’re going to come up with a date,” he said.

Continued Trump: “We can do two things, three things, at once. We can do that and we can have an open country, an open economy.”