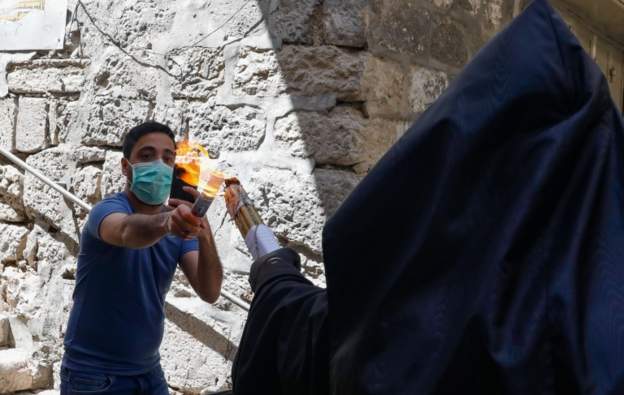 An ancient ritual has gone ahead at the Holy Sepulchre Church in Jerusalem for Orthodox Easter, without the usual crush of thousands of pilgrims.

During the Holy Fire Ceremony, a handful of Orthodox priests wearing face masks were present for what is seen as a miracle at the site revered by Christians as the location of Christ’s crucifixion, burial and resurrection.

As always, the Greek Orthodox patriarch circled the tomb, then entered and emerged with candles said to have been lit by a heavenly flame.

Usually, at this point, a big roar goes up from the crowd in the church and the fire is passed from candle to candle, to be taken to far-flung Orthodox Christian communities.

This year, special arrangements were made with the Israeli authorities allowing planes to collect the flame from Ben Gurion airport – on the condition that nobody onboard disembarked to avoid breaking quarantine rules.