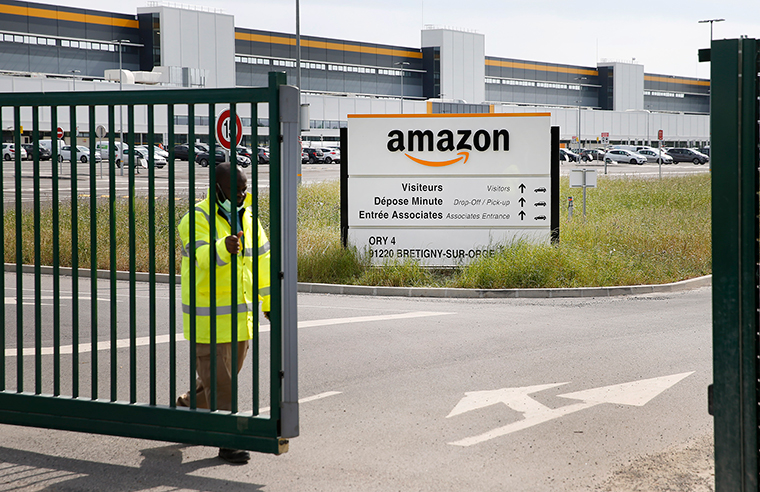 BRETIGNY-SUR-ORGE, FRANCE - APRIL 21: The logo of Amazon is seen at the entrance of the company logistics center on April 21, 2020 in Bretigny-sur-Orge, France. The French government has ordered the American e-commerce giant Amazon to take measures at four of its sites in France to better protect employees against Covid-19. This Tuesday, the Versailles Court of Appeal examined the appeal filed by Amazon against a decision requiring it to restrict its activity in France during this period of confinement. Amazon Logistique France has finally decided to close all of its warehouses pending the decision of the Versailles Court of Appeal, which will be made on Friday April 24.The Coronavirus (COVID-19) pandemic has spread to many countries across the world, claiming over 171,000 lives and infecting over 2.5 million people. (Photo by Chesnot/Getty Images)

Amazon will extend its shutdown in France until at least April 25, the company said on Tuesday.

Amazon announced it was shutting down its distribution centers last Wednesday following a court ruling that ordered it to restrict its local delivery operations to essential goods only.

“The company will reevaluate its position once the appeal court ruling is given on Friday, April 24th,” Amazon said in a statement in Tuesday.

Remember: France suspended all non-essential business last month, a measure that is set to remain in place until May 11. The French court also required that the company carry out an assessment of the “occupational risks inherent in the Covid-19 epidemic” in all of its warehouses.

Spanish children will now be allowed on errands with parents