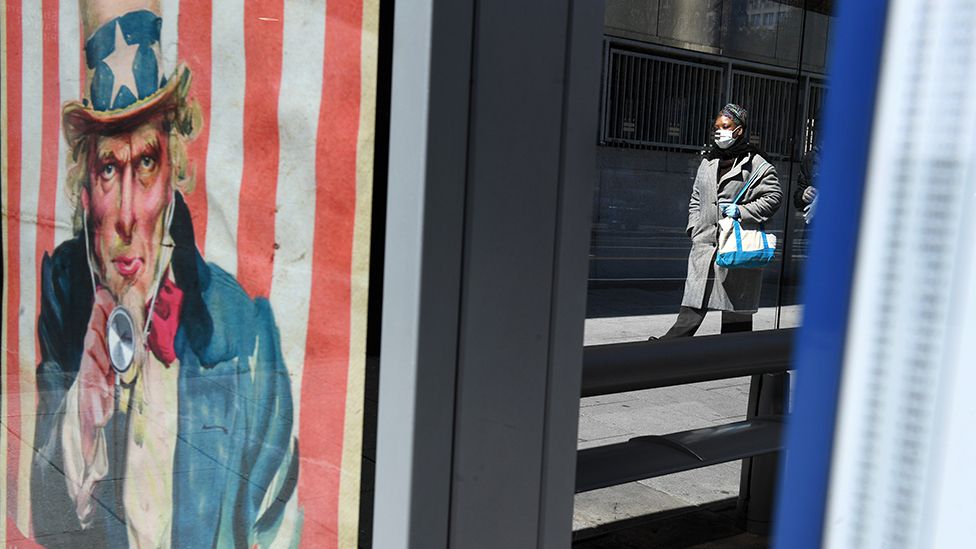 There are now more than one million confirmed cases of coronavirus in 181 countries and at least 53,100 people have died.

The United States has more confirmed cases than any other single country and more than half of all the cases have been in Europe, with Italy and Spain worst affected.

This series of maps and charts tracks the spread of the virus since it emerged in China in December 2019.

How many deaths and recoveries have there been?
The virus is spreading rapidly in many countries and the death toll is still climbing – but the majority of people are recovering from the infection. 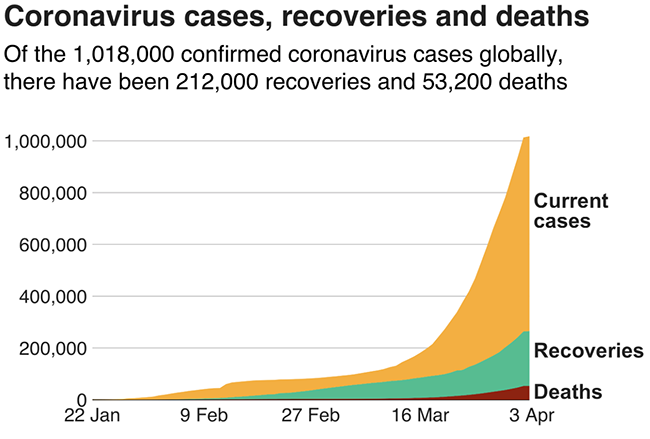 The country with the highest number of cases is the US, according to figures collated by Johns Hopkins University. With more than 245,500 confirmed cases, the US is approaching three times the official number recorded in China.

Around 3,300 people have died in China – but the US, Italy, Spain and France now have higher death tolls.

The outbreak was declared a global pandemic by the World Health Organization (WHO) on 11 March. This is when an infectious disease is passing easily from person to person in many parts of the world at the same time.

The WHO said it took more than three months to reach the first 100,000 confirmed cases worldwide, but it took less than a week for the number to double from 500,000 to a million.

The true figure for the number of people with coronavirus is thought to be much higher as many of those with milder symptoms have not been tested and counted.

China says it has now all but stopped the spread of the disease and the authorities have started to allow some access to Wuhan, the city in Hubei province where the outbreak began.

South Korea, where a major outbreak began in February, has also seen its number of cases fall in the last couple of weeks.

But badly affected countries like Italy, Spain and the US are still ramping up measures to try to slow down the spread of the virus.

Governments across the world have halted flights, locked down towns and cities and urged people to stay at home. 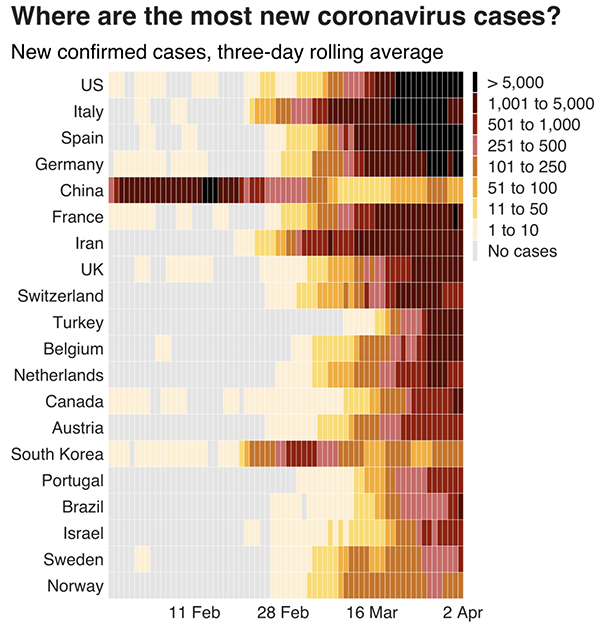 India and Saudi Arabia have begun strict lockdowns, while similar restrictions on the movement of people have been put into place across Europe.

Europe struggling to slow the spread
European countries have seen steep rises in infections and deaths.

Italy has the highest toll of any single country in the world, with more than 13,900 deaths. 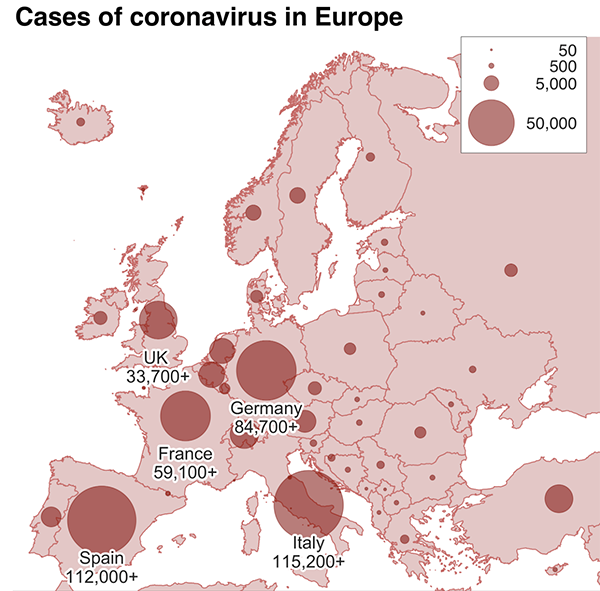 Spain has reported more than 10,300 deaths – the second highest of any country. There are now 112,000 confirmed cases, but data shows the rate of new cases is falling.

The Spanish government, which declared a state of emergency on 14 March, has further tightened its lockdown telling non-essential workers to stay at home for two weeks.

Spain has seen a third consecutive day of record death totals, with 849 people dying on Tuesday, 864 on Wednesday and 950 in the 24 hour period to Thursday. 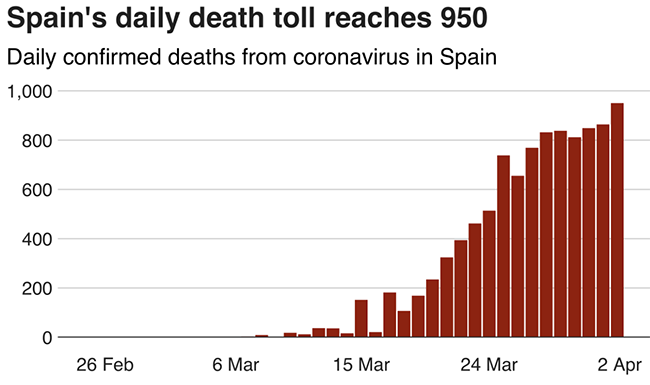 In Italy, there are cautious hopes that the country may have started to turn a corner, with data in recent days suggesting that the infection rate is slowing.

The majority of deaths have occurred in the northern Lombardy region, which contains the city of Milan. Hospitals there are reportedly at breaking point and retired doctors and nurses have been asked to return to work. 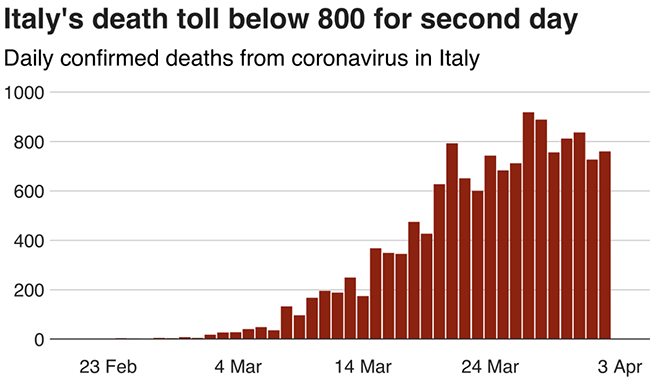 In Germany, where there have been more than 84,700 cases and 1,100 deaths, a leading health scientist has suggested that “immunity certificates” could be given to people who have recovered.

Prime Minister Boris Johnson announced a clampdown on 23 March, urging people to stay at home to avoid unnecessary transmission of the disease. Mr Johnson is self-isolating after testing positive for the virus on 27 March.

In Spain and the UK, deaths grew rapidly at first, doubling faster than every two days. That rate of increase has now slowed to doubling between every second and third day.

Italy’s death rate has also slowed, while that of the US is continuing in roughly a straight line, doubling about every three days at present. 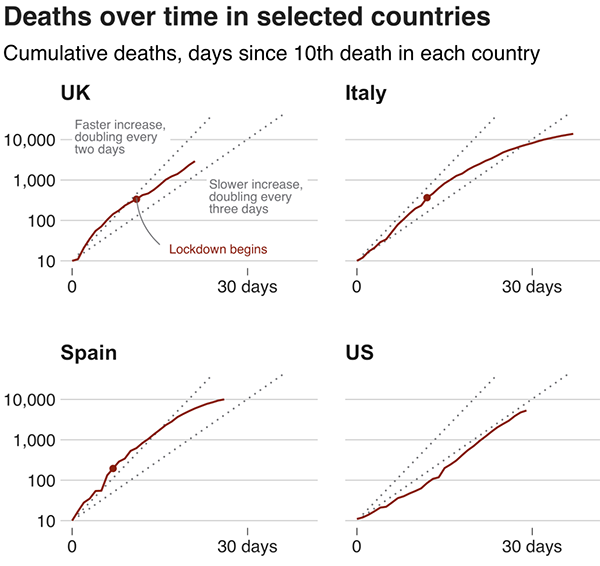 Cases rising quickly in the US
With around 245,000 cases – more than 92,000 in New York state alone – the US has more confirmed infections than any other country. 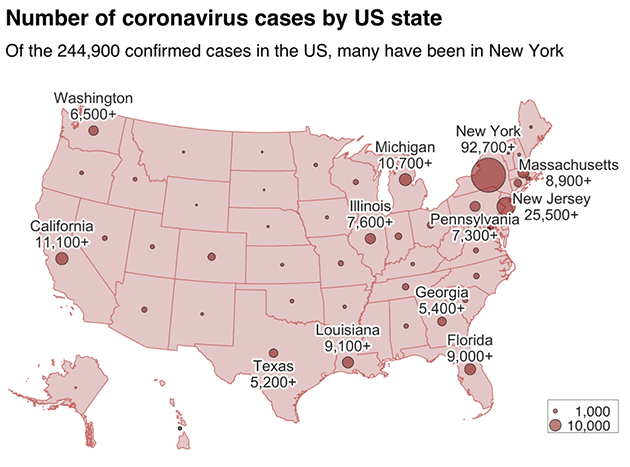 More than 80% of Americans are now living under some form of lockdown as states increase efforts to curb the outbreak. There are only five states where restrictions are not in effect.

President Donald Trump has said federal coronavirus guidelines, such as social distancing, will be extended across the country until at least 30 April. He had previously said they could be relaxed in mid-April.

Nationwide measures mean people must continue to avoid non-essential travel, going to work, and eating at restaurants or bars. Gatherings are limited to groups of under 10 people.

Stricter restrictions apply to millions in some of the worst-hit states.

The outbreak is having a major economic impact, with figures showing the number of people without jobs surging to a record high of nearly 6.6 million in the week ending 28 March. That is nearly double the week earlier, which was also a new record. The previous record was set in 1982, when unemployment claims hit 695,000.

American Airlines, one of the world’s richest carriers, has said it will apply for $12bn (£9.7bn) in government aid.

Millions are living under restrictions
India is one of the latest countries to enforce a lockdown, meaning its 1.3 billion residents are now forbidden from leaving their homes for a few weeks at least.

That means at least a quarter of the 7.8 billion people in the world are now living under some form of restrictions on their movement and social contact due to the coronavirus.

People in major cities like London, Barcelona and New York are now moving around far less than they were a few weeks ago, according to data from the travel app Citymapper. 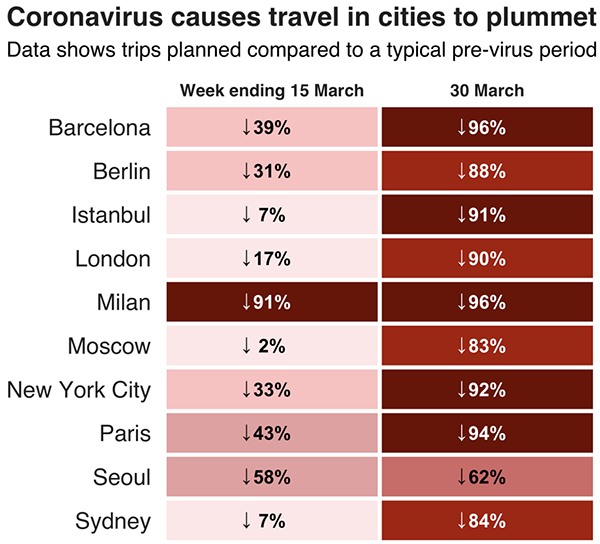 The data also shows that while Milan in northern Italy has been locked down for several weeks now, many other cities have only been restricting movement in recent days.

While movement is also down in the South Korean capital Seoul, the city hasn’t ground to a halt like European capitals despite facing huge numbers of coronavirus cases – a sign of the country’s decision to focus on widespread testing and contact tracing rather than social distancing.

In Russia, the Kremlin had insisted that there was “de facto no epidemic” in the country but earlier this week President Putin urged people to stay at home, which explains the significant drop in movement in Moscow.