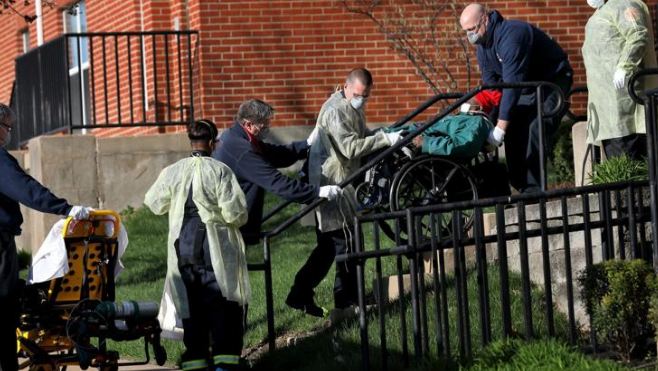 ST. LOUIS — Cases of COVID-19 in the St. Louis region rose to more than 600 Monday as leaders in both Missouri and Illinois were pushing to increase testing and, in some cases, cracking down on parks and churches where large gatherings continued despite orders for people to avoid crowds.

Missouri’s cases of the new coronavirus topped 1,000 for the first time Monday, up more than 460% from the week before. Thirteen of those people have died, according to the Department of Health and Senior Services.

Illinois had more than 5,000 cases Monday, including 73 deaths — three times the count one week earlier.

Missouri Gov. Mike Parson said Monday the rising totals can be credited in part to some increases in testing as there are now 2,000 daily tests conducted among the state’s 6.1 million people.

By Sunday, 14,107 tests had been completed on Missouri patients, according to DHSS.

On the other side of the Mississippi River, Illinois labs can administer about 4,000 tests a day for the state’s approximately 12.7 million people, Gov. J.B. Pritzker said Sunday. Pritzker said he expected that daily capacity to rise to more than 10,000 within 10 days as more workers and technology are added to labs.

Parson on Monday also said an order that prohibits gatherings larger than 10 in Missouri must be extended beyond its April 6 expiration.

“I’m thinking we’re at least 30 to 60 days from lifting any orders,” Parson said at his daily briefing. “This is the only way we will stop the spread of COVID-19. Please, stay at home.”

Parson said he is looking for signs of progress in mid-April, but didn’t sound optimistic the disease would be under control by then.

“I don’t want to give false hope to anyone. April will be a tell-tale month,” Parson said. “We know this is not easy. But I assure you we will get through this.”

St. Louis cracks down on churches
St. Louis officials, meanwhile, cited two churches for holding gatherings of more than 10 people on Sunday in violation of Mayor Lyda Krewson’s limit on crowd sizes, and may consider going to court to close churches that do not observe the ban. There were no reports of similar citations in St. Louis County.

The city issued civil summonses against Hopewell Missionary Baptist Church in the Lewis Place neighborhood and St. John Church of God in Christ in College Hill for violating the crowd limits, public safety director Jimmie Edwards said Monday. He said there were 25 people in Hopewell and he did not know the number at St. John. Edwards said the infractions were called in by members of the churches who were concerned.

Roy Horn of ‘Siegfried and Roy’ dies of COVID-19