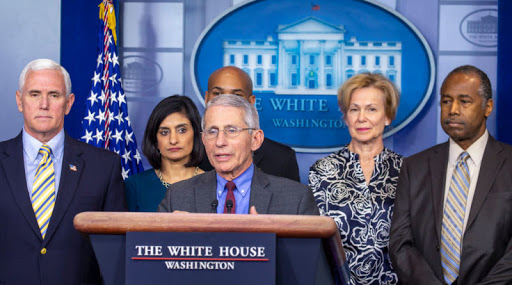 Dr. Anthony Fauci asserted Monday at the White House that President Donald Trump listened to his recommendation to institute mitigation policies to help stop the spread of the coronavirus.

The first and only time that Dr. Birx and I went in and formally made a recommendation, to the president, to actually have a ‘shutdown’ in the sense of not really shut down, but to really have strong mitigations, obviously there would be some concern by some that in fact that might have some negative consequences. Nonetheless, the president listened to the recommendation. The next second time that I went in with Dr. Birx in to the president and said 15 days are not enough, we need to go 30 days, obviously people had a problem with that, because of the potential secondary effects. Nonetheless, at that time, the president went with the health recommendations.

Fauci walked back and clarified comments he made on CNN during an interview with Jake Tapper on Sunday, that the administration could have enacted social mitigation polices earlier and saved lives. Fauci said he was responding to a “hypothetical” question.

“I can just tell you the first and only time that I went in and said we should do mitigation strongly, the response was ‘Yes, we’ll do it,’” he said.

Fauci said that his mention of “pushback” from the administration was a “poor choice of words” but that obviously some White House advisers had concerns about the cost of the social mitigation strategy.

“Are you doing this voluntarily?” CBS reporter Paula Reid asked Fauci.
“No … everything I do is voluntary,” Fauci replied shortly. “Don’t even imply that.”