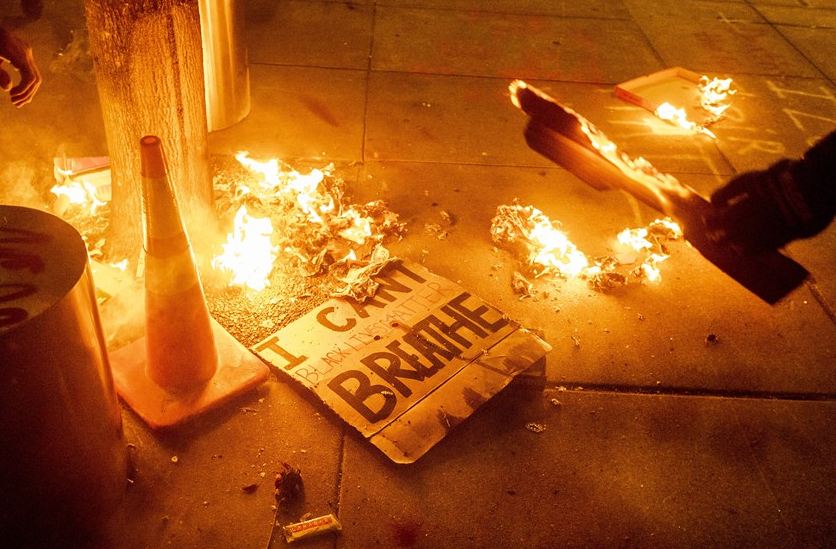 A volunteer, who has been camped outside the Multnomah County Justice Center since demonstrations against police brutality began more than 50 days ago, slathered barbecue sauce on the meat cooking just a few yards from federal forces trying to push back protesters.

Despite the surrounding chaos, the young woman in charge of Riot Ribs’ social media account took a moment to tweet.

“Still cooking. Still being tear gassed. Still have broken ribs,” the 22-year-old woman, who asked not to be identified for fear of law enforcement, wrote in her tweet. “Still feeding people 24/7.”

The tweet was followed by a red heart and an orange flame.For nearly two months, protesters have gathered in the park to march against the police-involved killings of George Floyd in Minneapolis, Breonna Taylor in Louisville and others. Recently, demonstrations have become increasingly heated after federal forces arrived without the consent of local leaders.

The standoff between law enforcement and protesters in the streets of downtown Portland has caused what some legal experts say could be a constitutional crisis. In the crosshairs are residents trying to assert more control over the city’s police department while being somewhat ambivalent about the violence that erupts every night like clockwork.

“What’s happening here is, we have dozens, if not hundreds of federal troops descending upon our city. And what they’re doing is, they are sharply escalating the situation,” Portland Mayor Ted Wheeler said over the weekend.

Since the protests started at the end of May, a small section of downtown Portland has been transformed into a kind of pop-up city surrounding the Justice Center and the federal courthouse. In a park across the street, tents have sprung up to house a makeshift pharmacy filled with emergency kits, a pantry where people can get free snacks and water, a secondhand clothing store and free outdoor catering now known as Riot Ribs.

Riot Ribs only accepts donations to help cover the cost of providing ribs and mac ‘n’ cheese for anyone who wants it. It’s been 18 days since volunteers first started feeding protesters and they intend to continue until federal forces leave Portland.

Over the weekend one of Riots Ribs’ cooks, Rico Rivera, was shot point-blank in the chest with a tear gas canister. He had been standing in a crosswalk near the Justice Center during broad daylight when police issued an abrupt order for the crowd to disperse. Rivera was standing near a patrol SUV when he was shot, he said.

Trump says coronavirus crisis will probably 'get worse before it gets better,' repeats it will 'disappear'

Coronavirus was circulating in France in December, case report suggests

Turkey’s malls and hair salons allowed to reopen next week