Home > News > World > Illinois still short of COVID-19 testing goal of 10,000 people a day — and even that might be less than what’s needed 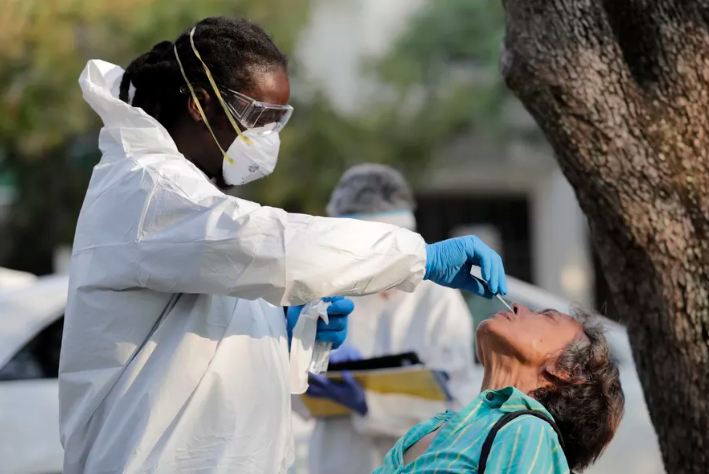 More than three weeks after Gov. J.B. Pritzker said the state needed to process 10,000 coronavirus tests each day to get ahead of the outbreak gripping Illinois, average daily testing numbers are still 40 percent short of that goal.

While Pritzker and the federal government say the state now has the machines needed to conduct thousands of more tests, a shortage in necessary supplies to actually process those tests has limited how many can actually be completed, officials say.

What’s more, some national projections adjusted for Illinois’ population suggest the state may need to process roughly 15,000 to 900,000 tests a day to be able to confidently chart the next steps toward returning to normal. Some experts say more tests are needed to screen individuals without symptoms who could unwittingly spread the disease and check people who are considered high-risk multiple times.

“We will never, ever get out of the stay-at-home order unless we do massive amounts of testing of those people at highest risk for COVID-19,” said Dr. Howard Ehrman, a former deputy commissioner of the Chicago Department of Public Health. “If Pritzker takes us out of the stay-at-home order before enough testing is done, either partially or completely, then thousands of more people will get infected and die.”

Dr. Robert Murphy, executive director of Northwestern University’s Institute of Global Health, agrees that it’s vital to ramp up testing to understand the true reach of the virus, isolate those who are infected, enable public health workers to trace the contacts of those who have been infected and ultimately get Americans back to work.

“Anybody should be able to be tested,” said Murphy.

However, he acknowledged the state — and nation — are a long way from being able to do that.

Goal set weeks ago
On March 29, Pritzker told reporters that he hoped the state would scale its testing capacity from roughly 4,000 tests a day at the time to the elusive 10,000 mark in just 10 days, or by April 9.

But since that deadline — a period in which Pritzker updated the state’s criteria for testing to include anyone with symptoms and additional sites started testing — an average of only 6,149 daily tests were reported. Nearly 8,600 tests were done on April 12, the most on any single day, but the number has dropped again, including on Tuesday when 6,639 tests had been processed in the previous 24 hours.

“There isn’t enough testing and there won’t be for some time to really open everything up,” Pritzker said during his daily press briefing. “And the fact that we’re going to need a whole lot more means we have to leave things still in a place that seems not normal to everybody and won’t be for some time.”

Illinois isn’t the only state struggling to run more tests, though. The lack of widespread testing has remained a critical issue since COVID-19 was first detected in the U.S. in January, and failures on the federal level appear to have set the country back as the deadly virus took hold.

Considerable steps have since been taken to bolster the country’s testing capacity: New diagnostic tests have been rolled out, more testing sites have cropped up and major commercial labs are now processing results.