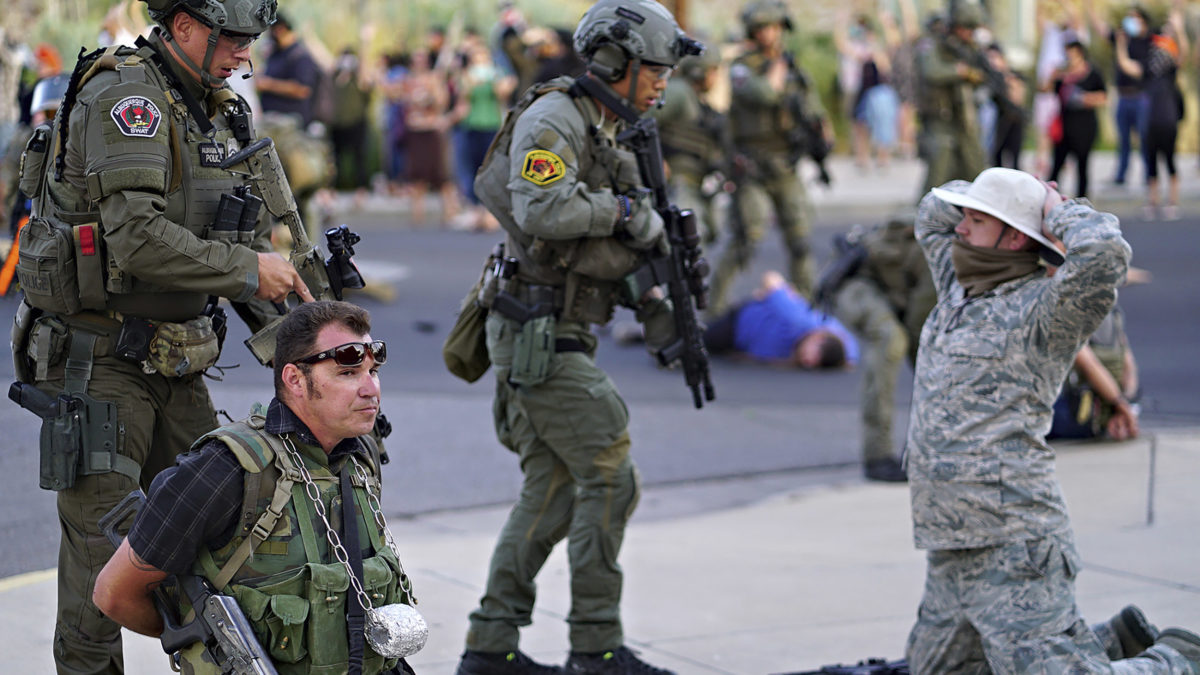 Albuquerque police detain members of the New Mexico Civil Guard, an armed civilian group, following the shooting of a man during a protest over a statue of Spanish conquerer Juan de Oñate on Monday, June 15, 2020, in Albuquerque, N.M. A confrontation erupted between protesters and a group of armed men who were trying to protect the statue before protesters wrapped a chain around it and began tugging on it while chanting: “Tear it down.” One protester repeatedly swung a pickax at the base of the statue. Moments later a few gunshots could be heard down the street and people started yelling that someone had been shot. (Adolphe Pierre-Louis/The Albuquerque Journal via AP)

The Albuquerque police and its emergency response team have detained “individuals” after a person was shot during a protest in Albuquerque’s Old Town, the police said.

“Police used chemical irritants and flash bangs to protect officers and detain individuals involved in the shooting. The individuals were disarmed and taken into custody for questioning. At this time, additional police teams have been deployed to ensure all officers can safely end the situation. APD investigators are also on standby. We will release additional information as it becomes available,” according to the Albuquerque Police Department in a news release.

Police say the shooting victim is in critical but stable condition.

Albuquerque Mayor Tim Keller said the shooting “was a tragic, outrageous and unacceptable act of violence and it has no place in our city.”

The protest took place near the Albuquerque National History Museum and the city’s police chief said he believes vigilante groups could have helped to instigate the violence.

“We are receiving reports about vigilante groups possibly instigating this violence. If this is true will be holding them accountable to the fullest extent of the law, including federal hate group designation and prosecution,” Albuquerque Police Chief Michael Geier said in a news release.

New Mexico Governor Michelle Lujan Grisham statement on Twitter, “The heavily-armed individuals who flaunted themselves at the protest, calling themselves a ‘civil guard’ were there for one reason: To menace protesters, to present an unsanctioned show of unregulated force.”

What is behind Nigeria’s unexplained deaths in Kano?